The following issues were outlined in a detailed report by the National Recording Preservation Board, part of the Library of Congress.

The report followed a “comprehensive, national-level study of the state of sound recording preservation.”

*Many important recordings have been lost or have become unplayable since the introduction of recorded sound in the late-nineteenth century. Many others are at risk of becoming lost.

*Public institutions, libraries, and archives hold an estimated 46 million recordings, but few institutions know the full extent of their 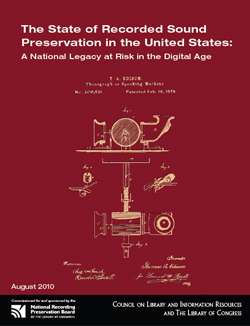 holdings or their physical condition.

*Few institutions have the facilities, playback hardware, and staff resources to preserve recordings.

*Master recordings are now more often in the possession of the original artists than they used to be. Many of these recordings are at risk because they are not being properly stored.

*Many recordings believed to have been made of radio broadcasts are untraceable, and numerous transcription discs of national and local broadcasts have been destroyed. Little is known of what still exists, where it is stored, and in what condition.

*Privileges extended by copyright law to libraries and archives to copy sound recordings are restrictive and anachronistic in the face of current technologies, and create only the narrowest of circumstances in which making copies is fully permissible.