Pandora was hyped-to-the-hilt on Wednesday, but it looks like Wall Street isn’t really ‘buying it’ anymore.

In Thursday morning trading, Pandora started dipping below its offer price of $16, before tanking into the low teens by afternoon.  By the bell, ‘P’ had landed at $13.26 after a brutal 90-minute finisher. 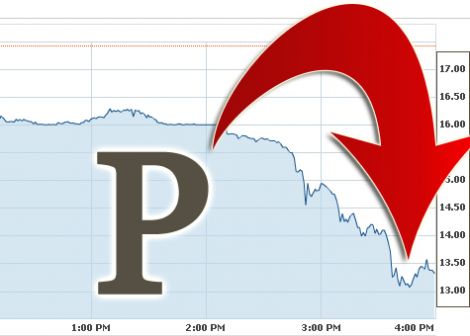 Smart investors got in-and-out on Wednesday, if they could, and grabbed a nice gain.  Pandora also rustled hundreds of millions in fresh cash, though broader questions surround the longer-term valuation and profitability picture.

Wall Street types suspect a dog, and that includes salty BTIG analyst Richard Greenfield.  As the southward progress became obvious, Greenfield stamped a ‘Sell’ onto Pandora, with a one-year price target of $5.50.

Already, the post-IPO jabs are starting.  “Is Pandora’s greatest asset its single-letter ticker?” MarketWatch blogger Tom Bemis snarked.  “Single-letter companies can still say they are part of a very exclusive club.  In Pandora’s case, it remains to be seen how long it can keep up its membership.”