What the Music Industry Looked Like On September 11th, 2001

Here’s a snapshot of what the music industry looked like on September 11th, 2001…

2. CDs accounted for 94.5 percent of overall recorded music sales, according to the RIAA.  Cassettes still accounted for roughly 2.5 percent of the total, LPs were roughly 0.2 percent, and album downloads were essentially nonexistent.

3. The labels were on their way to concluding their third-best year ever (the best being 1999), though they were also in 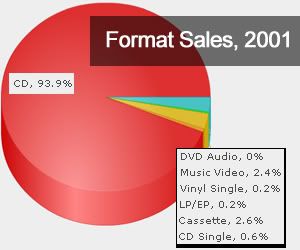 the early stages of a decade-plus decline.

4. Napster was just days away from concluding a partial, multi-million dollar damages settlement with major label groups. The application had been shutdown in July.

6. The iPod was still two months from being announced.  The iTunes Music Store was still about 20 months away.

9. The best-selling album on September 11th was the self-titled release from Aaliyah.  The singer had recently passed on August 25th, 2001.

10. The song with the most spins on radio on September 11th was “I’m Real,” by Jennifer Lopez.

11. Janet Jackson, Sade, Aerosmith, and Dave Matthews Band were dominating the live circuit.  U2 was preparing the North American leg of its Elevation tour, and actually planned the official announcement on September 11th.