Spotify continues to come under fire for its compensation levels to both artists and indie labels, though the company is now defending itself. The debate intensified last week, when band Uniform Motion opened their books and revealed Spotify per-album payouts that were just a tiny fraction of downloads, CDs, and especially vinyl (that comparison and debate is here). 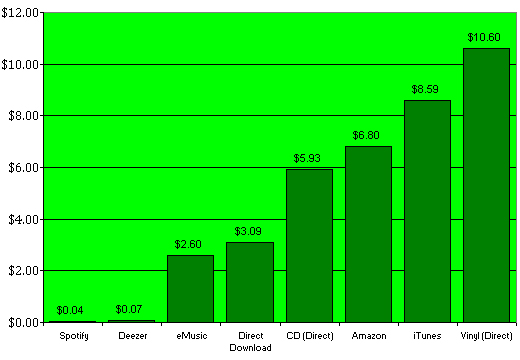 But those comparisons are entirely unfair, according to Spotify, which has now offered this statement to Digital Music News on the matter:

“Spotify does not sell streams, but access to music.  Users pay for this access either via a subscription fee or with their ear time via the ad-supported service [just like commercial radio] – they do not pay per stream. In other words, Spotify is not a unit based business and it does not make sense to look at revenues from Spotify from a per stream or other music unit-based point of view. Instead, one must look at the overall revenues that Spotify is generating, and how these revenues grow over time.

“Spotify is generating serious revenues for rights holders, labels, publishers and the artists that they represent.  We have paid over $100m to rights holders since our launch, and the overwhelming majority of our label partners are thrilled with the revenues we’re returning to them. Spotify is now the second single largest source of digital music revenue for labels in Europe, according to IFPI.

“It is also important to note that Spotify was created as abetter, more convenient alternative to piracy. Estimates suggest that around 95% of all music downloads are illegal. Spotify is now monetizing an audience the large majority of whom were downloading illegally (and therefore not making a penny for the industry) before Spotify was available.”