Who Else Is Screwing Concertgoers? Artists, That’s Who…

So, who’s responsible for high-priced concert tickets, lots of hidden fees, and lots of empty seats for that matter? Easy to blame Live Nation executives, though artists are also a critical part of this problem.  In fact, we’re now hearing from multiple places that artists oftentimes demand – and get – more than 100 percent of gross ticketing receipts for a show.  “These days, 90 percent of [a concert’s] gross revenue goes to the artists; sometimes, it is as much as 105 percent, leaving nothing for anyone else,” said Seatwave CEO (and former Ticketmaster Europe executive) Joe Cohen at Music 4.5 in London last month, as quoted by Billboard.  “That is what is breaking the model of live.”

Cohen later criticized Billboard for not getting the complete discussion, while calling for a broader overhaul of concert ticketing instead of isolating one group.  But Cohen isn’t the only one pointing to very expensive artist demands.  Just last month, the payout structure was also reiterated by Juice Entertainment in a court filing.  The local promoter filed suit last month against Live Nation for using heavy-handed tactics and threats to sever its agreement to produce the New Jersey State Fair (but that’s another messy story…) 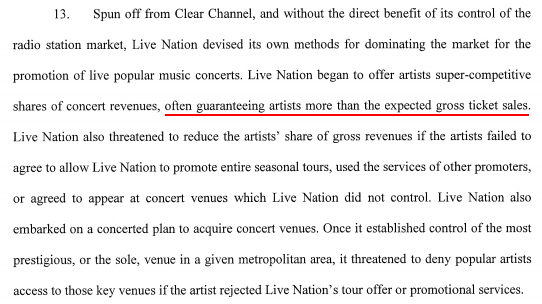 Sounds like these heavy guarantees come with serious strings attached.  But what’s wrong with getting the best deal possible in any situation, especially when artist shelf-lives can be short?  That’s a debate, though onerous artist demands are definitely part of the ticketing mess, regardless of how you view the negotiation process.  And it seems like a major roadblock against dynamic pricing, one-price ticketing, and other fan-friendly moves.