The flat, clunky, physical CD isn’t going anywhere, at least not in 2012. According to year-2011 breakdowns just shared by Nielsen Soundscan, more than two-thirds of all albums purchased in the US were physical CDs.  Out of a total of 330.6 million albums sold during the year – across all configurations – a healthy 223.5 million were discs, or 67.6 percent.

That follows an even more extreme breakdown from the UK.  Just a few days ago, label group BPI revealed that 76.1 percent of all albums purchased last year were CDs.

Back in the US, album unit sales edged slightly upward on the year, specifically by 1.3 percent.  CDs themselves slumped 5.7 percent, while digital albums gained a healthy 19.5 percent to reach a record 103.1 million units.  Vinyl gained 36.3 percent to nearly 4 million units, and cassette sales were negligible. 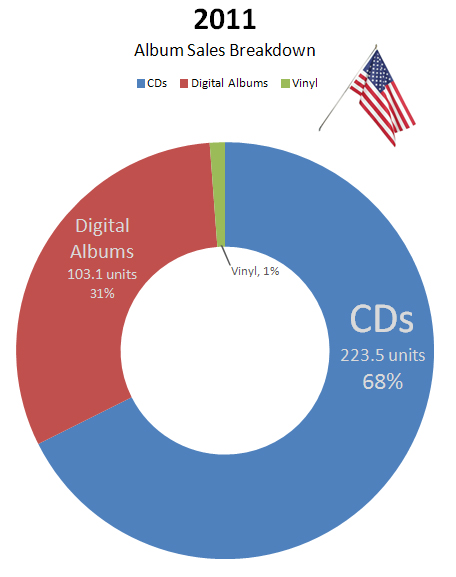