Study: Merchandising and Branding Are Irrelevant to Most Artists 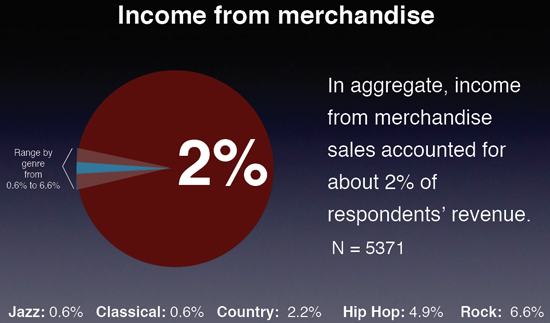 There’s more opportunity than ever ― in the history of the world ― for artists to sell merchandise and monetize their brands. The only problem is that very few artists are making any money from these non-traditional sources. Or, even pursuing the possibilities.

This was a slide presented at Midem on Monday by the Future of Music Coalition.  It’s the result of 18 months of surveying musicians across the US, with nearly 5,400 participating in exhaustive, time-consuming questionaires.  “Merchandising and branding is only relevant to a small number of US-based musicians,” Future of Music Coalition consultant Kristin Thomson shared.

In many cases, it’s not that artists can’t or won’t spread into areas like merchandise, it’s simply that it wouldn’t make much sense.  For example, certain sub-groups like orchestral instrumentalists and session musicians are typically investing little time on t-shirts.  Those musicians typically get overlooked, but they formed a substantial part of the survey.

But the study also included a lot of bands – and the Coalition uncovered not only a shockingly-low level of income from merchandise, but also from other non-traditional, brand-related streams like sponsorships on an aggregated level.  Here’s what the surveys showed for all ‘other’ non-traditional categories, which includes a grab-bag ranging from shwag to sponsorships. 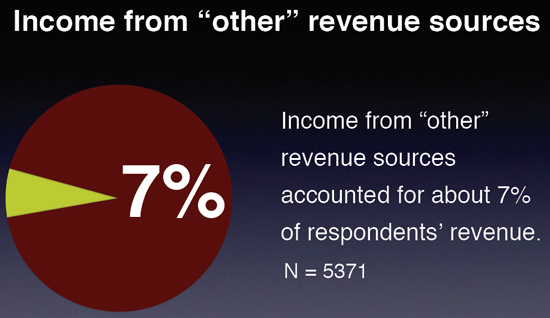 Then again, the ones that are pursuing these streams are forward-thinking and oftentimes fearless about experimentation.

“Artists are increasingly strategic about their brand,” Thomson explained.  “For musicians and artists that can leverage their brands, they benefit from being flexible, open-minded, strategic, and unafraid to involve their fans.”

And, completely unafraid to pursue things like publicly-available grants, Kickstarter, acting gigs, corporate-sponsored videos, and limited-edition merch.  Which brings us to a highly-adventurous, pioneering group of non-traditional artists, at least on the commerce side. 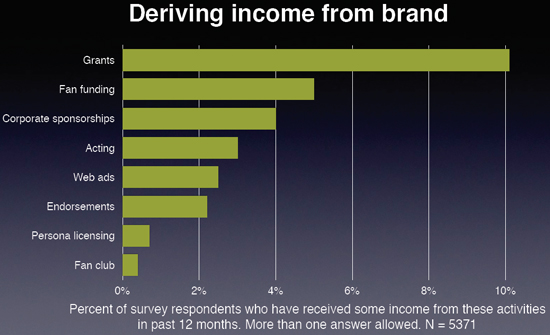