Judge Tells Google: ReDigi Can Fight for Itself…

So how’s that Google relationship working out, anyway? Warner Music Group ex-chairman Edgar Bronfman just called ‘Google Music’ an ‘oxymoron,’ and trade group IFPI recently broiled the search engine for disproportionate levels of illegal results.  All of that follows a blowup over SOPA, where Google and the majors found themselves violently opposed.           Which brings us to this week’s episode, where the latest drama involves Capitol Records v. ReDigi.  This is a pitched battle over ReDigi’s rights to sell ‘used MP3s’ through cloud-based transfers, and hinges on rights associated with the first-sale doctrine and cloud computing.  On Wednesday, the search giant moved to block an attempt by Capitol to dismiss the entire case (in legalese, through an attempted amicus curiae filing), based on important principles related to cloud computing. 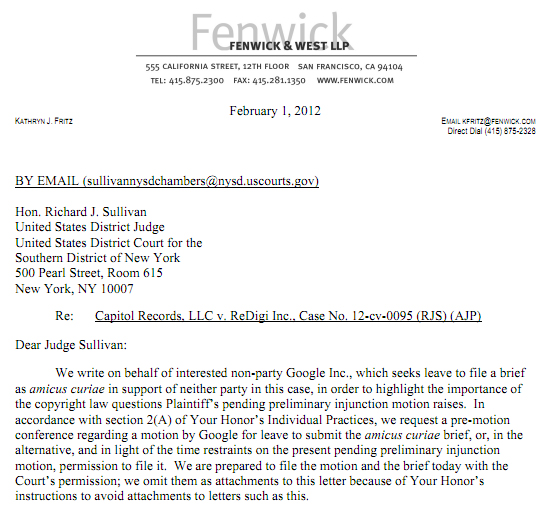 Google wants the case heard, for legal clarity among other reasons.  “A premature decision on incomplete facts could create unintended uncertainties for the  cloud computing industry,” the request stated.  “The continued vitality of the cloud computing industry — which constituted an estimated $41 billion dollar global market in 2010 — depends in large part on a few key legal principles that the preliminary injunction motion implicates.” It’s a big move against EMI-owned Capitol, and the fellow major labels that it represents.  But Google has a lot riding on cloud computing, which makes a decision over cloud-based digital resale an important matter.  But hearing the case – and potentially losing it – is exactly the opposite of what the major labels want.  Which is why Capitol Records quickly moved to deny Google the ability to insinuate itself into the action. On Thursday, a judge agreed, and told Google to mind its own business.  The parties can duke it out themselves, thank you very much.  Request, DENIED. 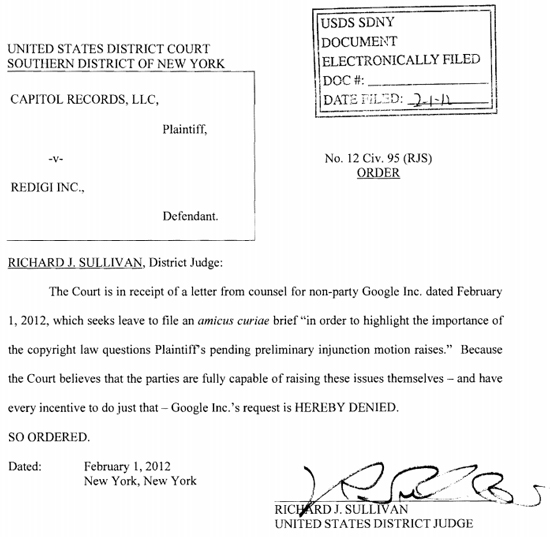