Yes, Spotify Is Raising a Seriously Gigantic Round…

First, industry rabblerouser Michael Robertson claimed that Spotify was chasing a monstrous round – on top of the roughly $200 milion already collected.  Robertson’s a pretty dialed-in guy, and now, separate sources are pointing to something similarly massive ahead.  Which means the next step is probably a funding announcement from Spotify itself. 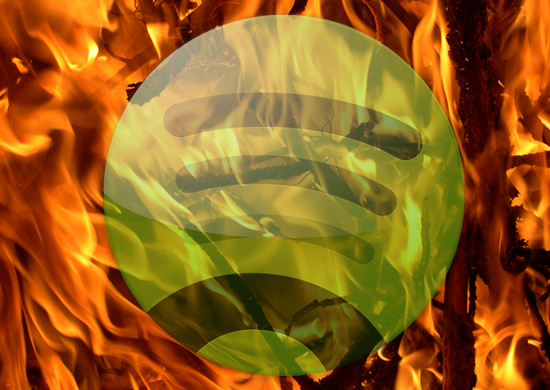 And it might be colossal: according to multiple reports now published, Spotify is pursuing a king-size investment that would value the company at roughly $3.5 billion.  Currently, Spotify has a valuation of about $1 billion, and most recently raised $100 million (give or take).  Spotify has declined to comment, though the money would probably be used to feed the current operation, expand the global footprint, and even keep the royalty checks flowing to the majors.

Which means an intense level of cash-burn, even for bullish Valley types.  “These sources asked not to be named because they don’t want Spotify to know they are giggling at it behind its back,” Business Insider journalist Nicholas Carlson sniped.  Apparently, that ‘giggling’ also means that certain investors are passing on this round, particularly given the insecurities surrounding content licensing and non-ownership.

Apparently Andreessen Horowitz and TCV are among the decliners, among other heavyweights.  “A source close to a Spotify investor tells us these rejections have not ended the company’s fundraising efforts, and that some late-stage startup investors have expressed interest in the deal, even at so large a valuation,” Carlson continued.

Certainly, this all sounds outrageous on many levels, but great news for the likes of Universal Music Group and Sony Music Entertainment.  It’s also the type of smashingly-large thinking that sometimes results in smashing successes – or even a ‘music OS’ – though the question is whether nosebleed funding motivates the major labels to demand more – and more often.  So far, that approach has worked out well for them.