Grooveshark and its parent company, Escape Media Group, are now exerting heavy pressure on Digital Music News to enforce a subpoena related to an alleged whistleblower.  The company is now marshalling the resources of two prestigious law firms – Rosenberg & Giger in New York, and McPherson Rane LLP in Los Angeles – and filing a court petition for subpoena enforcement while scheduling a hearing in LA Superior Court on May 15th.  This army of litigators is headed by Matthew Giger, with Anita Stephan, Pierre Pine, and Edwin McPherson heading the LA-based effort.  McPherson is perhaps the most illustrious member of this group, thanks to a clientele that includes Lindsay Lohan. 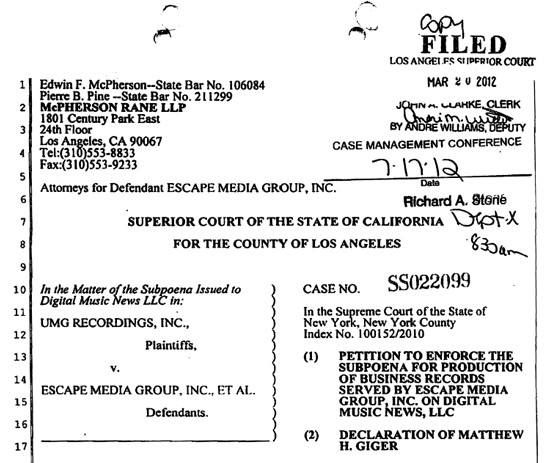 Of course, a legal team this extensive (and expensive) means endless and redundant paperwork, lecturing ‘nastygrams’ and not-so-friendly phone calls.  That’s probably part of a well-worn intimidation tactic designed to bury ‘opponents,’ but often divorced from the actual merits of the case.  We have a shoe-string budget for defending against this onslaught.

Regardless, we hope that we can convince the court on the merits, while upholding critical protections.  Accordingly, Digital Music News has filed a Response to the Escape-Grooveshark Petition that outlines our positions on the matter.

A major issue we’re presenting to the Court involves two very different and contradictory arguments coming from Grooveshark ― one being told to a judge in New York, and another to the judge in Los Angeles.  In New York, Escape is moving aggressively to dismiss litigation brought by Universal Music Group, Sony Music Entertainment, and Warner Music Group, based on the lack of evidentiary weight offered by an  anonymous comment posted on Digital Music News (and the target of the subpoena).  In New York, the Escape legal team calls the anonymous comment ‘implausible on its face,’ and lacking ‘even the barest trace of reliability,’ and asks that the New York court disregard it as evidence.  Yet somehow those very strong New York arguments were omitted from a stack of paperwork presented by Escape to Los Angeles judge Richard A. Stone, who is being told that identifying information surrounding this anonymous commenter is important to the defense of the New York case.

As a quick background, the anonymous commenter – in a story published by Digital Music News in October – talked about Grooveshark management’s role in uploading unlicensed songs into the Grooveshark system.  If true, that would constitute a serious violation of DMCA protections, and the anonymous comment has became part of a massive lawsuit brought by the major labels.  The majors allege that this comment ― along with a mass of other more ordinary evidence ― seem to be pointing in the same direction.  The anonymous comment carries no identifying information whatsoever, so we – just like the Escape legal team arguing in New York – are having trouble determining why it is important evidence in the New York case.

Which means the New York Court might agree with Escape, and determine that the anonymous comment is not substantial enough to be entered into evidence.  Yet somehow, judge Stone hasn’t yet been briefed by the Escape-Grooveshark legal team on the lack of weight of the anonymous comments it argues in New York, at least judging from the deluge of paperwork we’ve seen.  All of which raises the obvious question of whether this extremely time-consuming and expensive subpoena exercise makes any sense, or is merely wasting the finite resources of the court and Digital Music News.  And, more importantly, potentially trampling on First Amendment, journalist Shield Law, and related privacy concerns,  chilling the exercise of free speech.

There are other issues that we have presented to judge Stone.  Digital Music News has repeatedly stated that we have no further information about this anonymous commenter, and put that in writing.  Yet in private written correspondence, attorney Giger has flatly accused Digital Music News of lying, while lecturing us with completely misguided and uninformed information related to database architecture.  It makes this whole exercise seem vindictive, both against Digital Music News and the anonymous commenter.  It seems like it would be extremely damaging to Grooveshark’s case in New York if it was discovered that the anonymous commenter is actually a Grooveshark employee.  But the discovery would also seem to put the whistleblowing commenter at serious risk.

There are other reasons why we question the real motives for this subpoena attempt, and wonder whether vindictiveness is involved.  For example, top Grooveshark executive Paul Geller publicly told the PHO list that he suspects a ‘nefarious’ relationship between Digital Music New and Universal Music Group, and pointed to that as a major reason for the subpoena action.  We’re not sure that this allegation stands the legal litmus test for a subpoena, nor do we think it’s a good idea to tamper with important First Amendment and Shield Law protections for such a frivolous and misguided motivation.

And, to potentially sympathetic organizations: over the past few weeks, Digital Music News has been approached by a few organizations that might help our defense. We are a very small company and need the help.  We are actively soliciting amici curiae and even pro bono litigation assistance in this matter.  Please contact me personally (paulr — at — digitalmusicnews — dot — com; (310) 928-1498) to discuss.