The industry’s addiction with likes, friends, and followers is reaching junkie status.

So maybe this is a step towards recovery.  Or, at least a little more balance: according to a new finding from NPD Group, social media’s role in music discovery is actually minor compared to other formats.  In fact, far stodgier platforms like AM/FM radio, TV, and simple person-to-person recommendations tower in importance over crafty Facebook campaigns.

Check out this breakdown from NPD Group researcher Russ Crupnick, who decided to ask music fans a fairly simple question:

“How did you first hear about (whatever song) you wanted to hear again?”

These were ‘highly-engaged music fans,’ not disconnected, casual listeners.  Yet Crupnick still found that old-school radio played a stunningly disproportionate role in discovery. 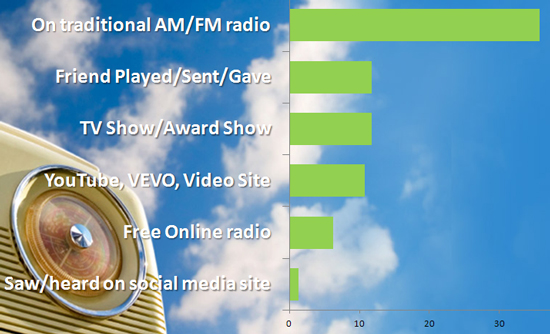 Crupnick was far from dismissive of social networking platforms, but noted that this space is ‘a little bit overhyped’.  But could it be that Facebook is actually wildly overhyped, totally overblown, and not as effective as we thought?  Over in concert-land, Digital Music News recently found entrants like Songkick having little impact on concert attendance, despite creating more awareness than ever before.

But wait! Critics blasted that report, saying it’s just too early to judge – and there are significant lag-times at work.  Perhaps inside the bubble, Facebook-connected apps and alerts are in full swing, but in reality, there’s still an upward curve.  Which is why when Crupnick asked these same consumers what it would take to get them to buy more music, many said ‘more Facebook alerts‘! 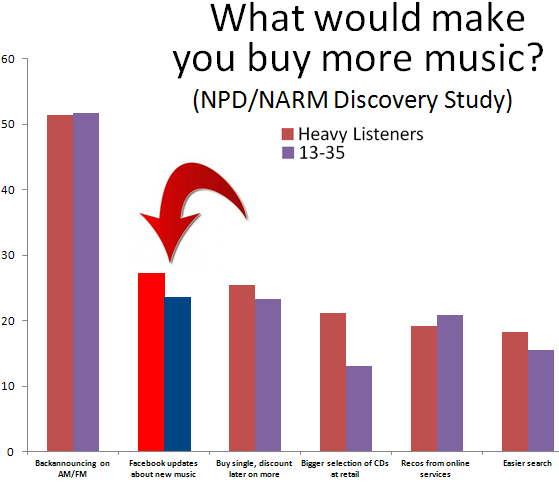 (actually, the right side of this graph goes on with even more reasons, which you can see here).