Sony Music Entertainment: The Largest Record Label In the World

That’s according to the latest marketshare tallies from Nielsen Soundscan, for the most recent week.

And in the ‘mine is bigger than yours’ world of the major label, this means everything.  Here are the most-recent marketshare breakdowns, shared with Digital Music News by a gloating major label exec.

So who cares, exactly?  Extremely-competitive (and overpaid) major label executives who place a disproportionately large amount of emphasis on marketshare – that’s who.  Like Sony Music chairman Doug Morris, whose merry band of Avengers are sticking it to their former employer, UMG.

But this isn’t a one-week phenomenon, by any stretch.  It’s been a dogfight in 2012, though the trend appears to be shifting towards Sony leadership.  That is, against UMG alone: according to insiders, Sony’s marketshare challenge was a major motivation for Universal’s planned acquisition of EMI.  The buyout would easily put UMG on top of the roost, that is, if it passes regulatory muster.

And, if UMG can ultimately afford it. 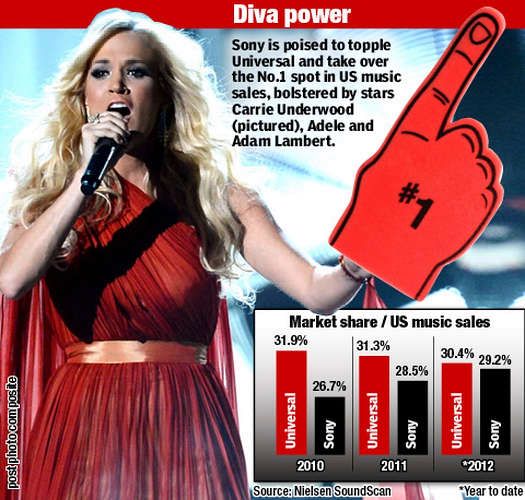