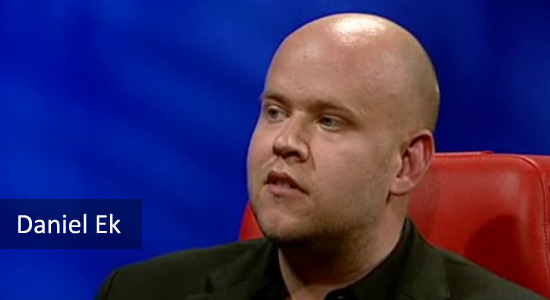 Mossberg: So there have been some complaints from artists that they’re making very little money off your service, compared to what they make off the download services.  You guys have talked about the value of artists, here and elsewhere, how important artists are, you go around telling them how important it is to make great music.  Some of them seem to feel that you’re not paying them enough.  What’s your answer to that?

Ek: So, the answer really is that – again – this is a new model, it works entirely different than it’s ever worked before.  If you think about the old model, you used to buy a record, there was a transaction going on. If you think about that translating to iTunes, there’s a transaction
going on here.  The difference with Spotify is you get paid every single time someone plays your song.  And that’s not the same as if someone buys it, but that adds up –

Ek: Right, I don’t agree, because we’re the second-largest digital revenue stream for labels in Europe already, after iTunes –

Ek: Sure.  But again, ya know, our relationship right now – we pay out the money to the labels, and the labels are in turn paying out to the artists.

Mossberg: Depending on what their formula is for paying the artists…

Mossberg: …and whether it differs from a transaction versus a subscription.  And I don’t know, maybe you guys do know.

Sean Parker: It doesn’t, it doesn’t really, not in most cases.    The idea, the idea of paying for portability, that ownership means portability and access everywhere.  It’s such a new and radical idea, and to your point, we’re just starting out, our userbase is not enormous in the US.  There’s a big difference between a paying customer – right – who has access to portability, and a free–tier customer, who’s basically discovering music and building their collection.  We want users to sit on the product, build a library, build playlists, and eventually get to the point where they say, ‘damn I want this playlist in the car, I want to take it to the gym with me, or I want to burn it to a CD and give it to my parents,’ whatever.  There will come a time when you’ll want that accessibility, and the only way you get that is by becoming a paying customer.

The full interview, from the D10 conference, is here.