Slowly but steady, the streaming music space is figuring something out: the less intrusive ad.  Of course, better if you can get ’em pay, but here’s an experiment in discrete placement on Songza’s iPad app.  Less invasive, though a sleek slide-in can provoke accidental clicks… 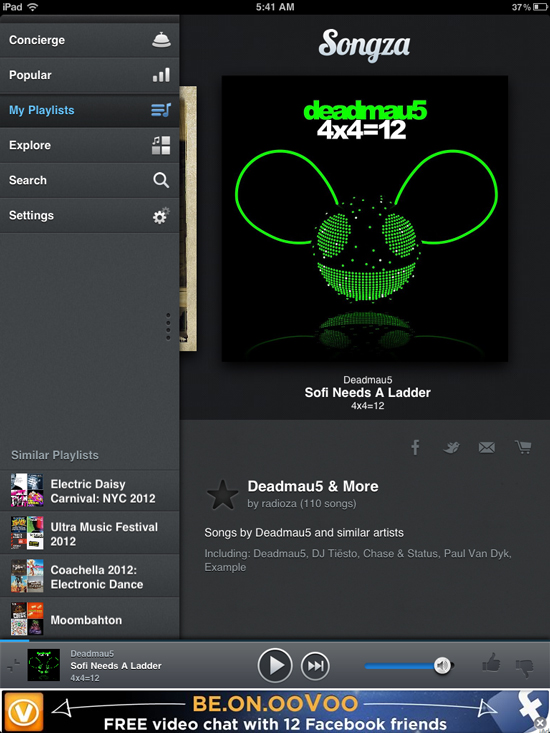 Post-acquisition, lots of little interesting rumblings coming out of EMI Music Publishing.  That includes plenty of mixed messages surrounding the departure of president Big Jon Platt.  Some are pointing to a push by incoming owner Sony, while others are pointing to inevitable ego clashes and irreconcilable differences.  The debate is whether Platt ultimately decided to leave on his own.

Separately, roughly half-a-dozen EMI Music Publishing executives have left the building, while EMI Group CEO Roger Faxon is also rumored to be exiting with a very handsome package.  Faxon previewed his parachute in a comical exchange in front of Senate investigators last month; some onlookers are reporting a very healthy send-off, especially for such a distressed company.

Is it a cliff for the Brits?  The BPI is now reporting a sizeable, 12.7 percent decline in year-over-year album sales for the second quarter, though digital continues to increase.  Just not enough.

Which brings us to much-anticipated, first-half figures back in the US.  Stay tuned as Nielsen Soundscan stats emerge.

And, in case you can’t make it to Chicago, Pitchfork.tv on YouTube will be streaming the 2012 Pitchfork Music Festival live from Chicago’s Union Park.  That action happens July 13-15.

And, Yomo Toro, the ‘King of the Cuatro,’ has now passed at 78.  The Cuatro is a Puerto Rican gem and national instrument; it’s smaller than a guitar but features a total of ten strings.