People for the Ethical Treatment of Musicians (PETm). Who’s In?

The idea comes from Projekt Records founder Sam Rosenthal, an indie disillusioned with a system that seems completely stacked against artist interests.  “Talking with my sister about the issues surrounding fair compensation for musicians, the phrase ‘People for the Ethical Treatment of Musicians’ popped out of my mouth!  I loved it.  I wrote it down. I created a graphic….” 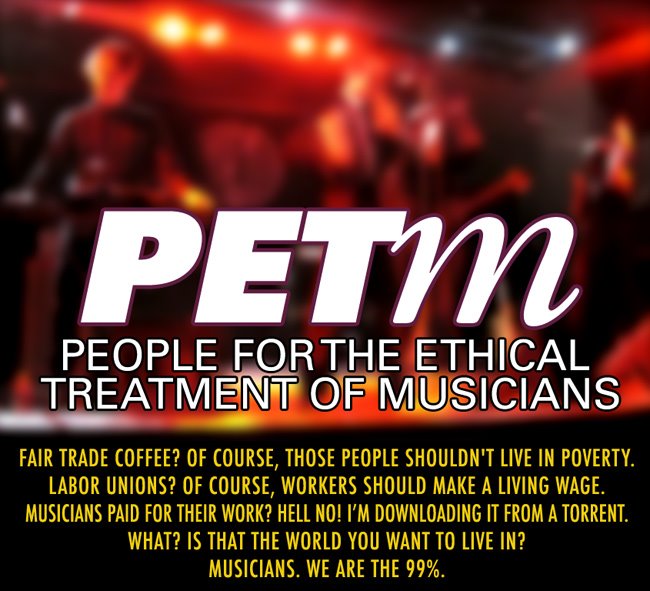 We wonder what the next steps are. Sam continues…

“If people support the 99 percent, they should also support musicians rights to get paid for their work.  Every musician I know is in the 99 percent!  Musicians create something that people value.  So I see it as an ethical question, whether or not people truly believe in supporting the 99 percent.

“I truly believe in musicians (and all creative artists, including bloggers) getting paid for their work.”

I wanted to satire the contradiction. I created the graphic above and posted it on Facebook. The idea is catching people’s imagination and is getting shared all over the place!  It has over 500 shares after two days, I’ve never had anything shared that much.

I struck a nerve.

“I’d like to address one other point.  As I read the comments on the walls of all the great people who shared the graphic, I see people posting responses such as, “I don’t pay for music because bands don’t make money from selling their CDs, they make money on the road from shows and merch sales.” I want to point out just how FALSE that argument is.  Sure, U2 and Lady Gaga and Madonna make money on the road.  But the majority of musicians (and by that, I’d guess 99 percent) at best break even on the road.

“Do you know what it costs to rent a van, buy gas, pay for food and hotels for four people?  Do you realize that most small touring bands bring in between $0 and $500 a night.  It doesn’t add up!  At the average show, a band sells 5 CDs.  Most bands are lucky to come home from a tour with $100 in their pocket.”

“Touring is NOT how (most) bands make money.  Four people missing work for a week, to basically come home dead even? That’s not earning a living!”

But again, what are the next steps?  Does this snowball into something bigger?