Updated, 12:15 pm PCT: Spotify has contacted us to clarify that Adele’s ‘Rolling In the Deep’ has been available since release, something we did not mention.

Most Spotify users are free Spotify users, and that’s a serious drag on artist payouts. As part of a broader set of payout stats shared by UK-based artist distributor Ditto Music, it turns out that Spotify’s premium subscribers are worth triple the amount to artists and labels.  The only problem is that there’s no way to separate these groups, based on Spotify’s rules.

Indeed, that explains why it took 18 months (and 22 million albums sold) before Adele’s 21 landed on the service.  According to numerous reports, Adele was actually willing to license Spotify right off the bat – that is, if she could offer the album to premium subscribers only, a deal Spotify refused.

Now, we have an idea why Adele’s camp was so interested in a premium-only deal.  And, why Spotify simply didn’t want to open that Pandora’s box.  Here’s a breakdown of just how much more artists get from premium subscribers than free streamers. 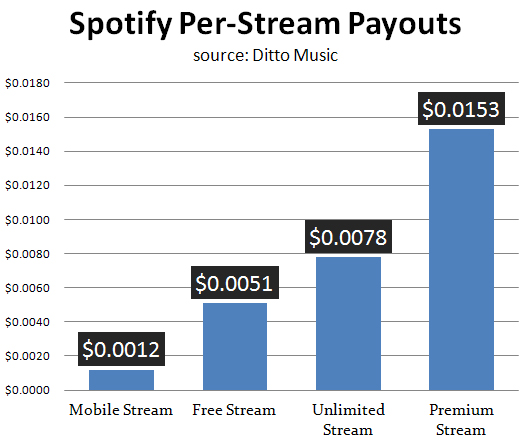