Why Spotify Can’t Be Happy With 4 Million Subscribers…

On Tuesday, Spotify announced that it had reached 4 million paying subscribers worldwide, with 15 million active users.  Which means the growth picture now looks like this: 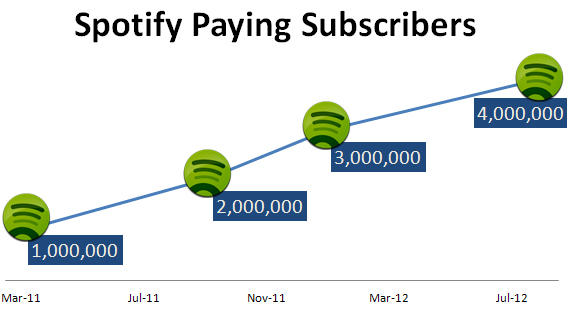 But it also means that Spotify is underdelivering against fairly wild expectations, on a number of fronts.  And 4 million is nowhere near where this company needs to be.

(1) This is a company with hundreds of millions of dollars in financing.

This isn’t a fun music play, it’s a gigantic financial game.  And all of that money needs a massive return at some point in the relatively near future (ie, a few years).  Which means that Spotify needs to start putting massive heat – right now – on well-entrenched rivals like iTunes and iCloud.

That’s the game Spotify has chosen to play.  And the playing field now features an extremely difficult IPO market, a problematic Facebook partner, and some seriously huge acquisition hurdles.

(2) This still means nothing to most artists.

You can trot out Swedish success stories, and put a cheerleader like Chester French on the stage.  But that doesn’t solve some fairly serious artist compensation problems, despite recent per-stream improvements.

The pretty difficult reality remains. Major labels are getting millions in this game; their artists are getting nothing.  Smaller artists and indies are still collecting pennies (albeit more than before).

You can say streaming is the future, but who gets to own that future?  Apple has a complicated role in the decline of the music industry, but artists actually like Apple, and they distrust Spotify.  And this is a company that can make iCloud a fierce Spotify competitor over a weekend.

If the argument is that everything makes sense with scale, then you need massive scale, right now.  Four million does not represent that, and the risk is that this growth trajectory never delivers it.

It’s a credibility gap, no one trusts these guys.  Spotify shares selectively, they fudge their active user numbers.  They adamantly refuse to disclose payout details, and fiercely protect their major label partners at all costs.

This is not a business model based on transparancy or artist friendliness; at worst it’s based on duplicity and financial wizardry.

Upon entering the US, for example, they promised 50 million active users to advertisers – within the first year.  Maybe revolutions take longer than that, if Spotify and its highly-leveraged partners can afford that time.