RIAA Member Payments Are Down 44 Percent In Just Two Years

Save the violin for somebody else.

According to just-released tax filings from the RIAA, major label contributions have dropped 44 percent in just two years, for obvious reasons.  And, given considerable lags in IRS tax filings for non-profits, the drop-off is probably far worse in 2012. Yet the filings reveal that two executives are still taking home more than a million dollars each, and a dozen are pulling six-figure salaries north of $300,000.

In fact, the paperwork also lists a handful of executives receiving plum $600,000-$700,000 salaries.  And, there seem to be only modest efforts to downsize: in total, the RIAA pays nearly $13 million in employee compensation, down from just over $16 million two years ago.

Outside of that, the RIAA is still paying nearly $4 million for the services of outside, high-priced law firms like Jenner & Block, also according to the filings.

This is an organization that seems determined to plunder its own village, despite obviously urgent financial problems.  During the period, the largest payouts belonged to the now-departed Mitch Bainwol, who collected $1.75 million for the period; and Cary Sherman, who banked $1.4 million. 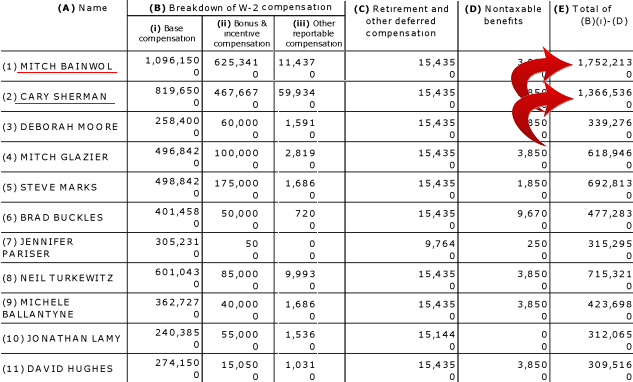 Those might be reasonable salaries at a healthy corporation, but are extremely questionable for a troubled recording industry trade group – even one with considerable lobbying needs.  On that note, Sherman has been tightening the belt: during the previous year, his take-home swelled past $3 million, a figure RIAA staffers downplayed based on accounting reasons.  Now, we know with certainty that Sherman is one of the fattest executives in this business.

December, 2011:”The PR Guy at the RIAA Makes More Than the President of A2IM…”

The contribution cliff is quite considerable, and comes against considerable pressure to reduce dues to groups like the RIAA, BPI, and IFPI.   In filings just two years earlier, membership dues were listed at $49.8 million.  That figure now stands at $27.9 million, as of March, 2011.  The trajectory suggests heavy renegotiations with the big four-turning-three, and far lower figures in the current period. 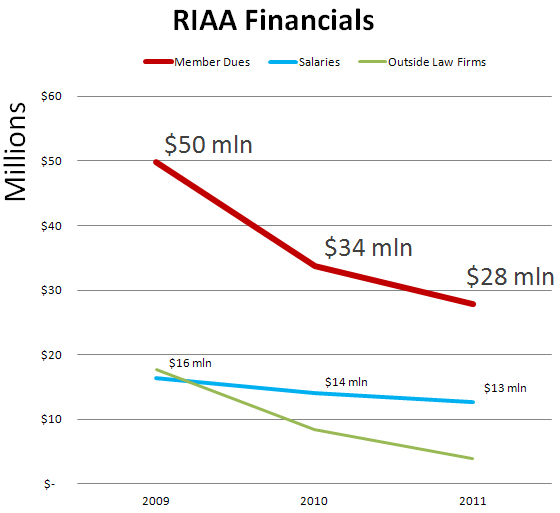 On that note, we’re not sure why there’s such a significant delay in these IRS postings.  The latest filed paperwork covers the tax year ending March, 2011, and unsurprisingly, the trade group opted to file on a Friday.