The Album Is Now Completely Collapsing In Britain…

So when does America experience the exact same thing? The warning signs in Britain looked something like this… 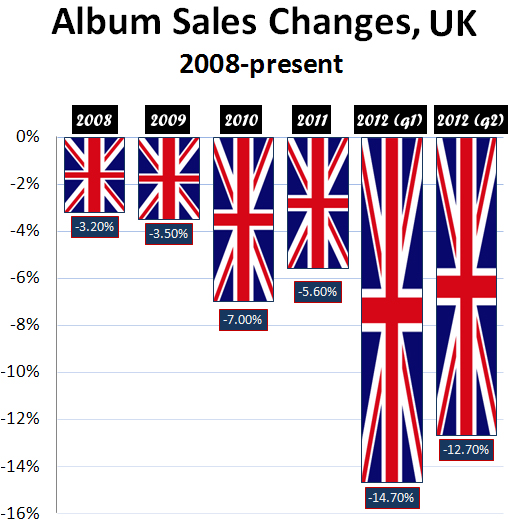 But that was just a preview.  According to stats just published by the Official Charts Company, the best-selling album in the UK last week sold just 9,578 units.  It was Rihanna’s Talk That Talk, and it’s the lowest total since the company started tracking sales in 1994.

There are no other records to show a slower-selling album release.  The UK has a population of roughly 60 million.

The CD and broader album bundle have been dying for years, though back in the day, the UK was regarded as a holdout.  Part of that was based on a lag in technology, though many pointed to the greatest, most rabid music fans in the world.  Turns out that doesn’t necessarily correlate with album sales.  Instead, voracious appetites have been unleased upon streaming, amassing massive download collections, or committing cash to concerts.

So what about the US?  Last year, sales seemed to flatten out, though there’s now a huge asterisk attached to that story.  Most of the sales were coming from deeply-discounted catalog releases, including $5 titles at places like Wal-mart.  At present, the CD sales story in the US is one of continued decline, though the summer has produced some seriously-slow sellers.

Actually, when it comes to the US, the exact same collapse could be right around the corner.  During the last week of July, Zac Brown Band’s Uncaged scored a number one album on sales of just 48,278 units.  Which is the second-lowest album total ever recorded, since tracking data started in 1991.