Update: July 6th, 2013: This article was published last August, but there was an important error just raised (thanks to Noël Ramos of Independent Music Conference for realizing it).  The axes were actually reversed, meaning ‘Musical Groups and Artists’ and ‘Recorded Music Shipments’ were representing the wrong things; the corrected graphic is below (the story itself remains the same).

There’s
more music being created than ever before, but paradoxically, musicians are making less. Which means there are also fewer musicians and music professionals enjoying gainful employment, thanks
to a deflated ecosystem once primed by major labels and marked-up CDs.

It’s a difficult reality to stomach, especially given years of misguided assumptions about digital platforms.  But it’s not really a revolution if it’s not getting people paid.  And according to stats supplied by the US Department of Labor, there are 41 percent fewer paid musicians since 1999. 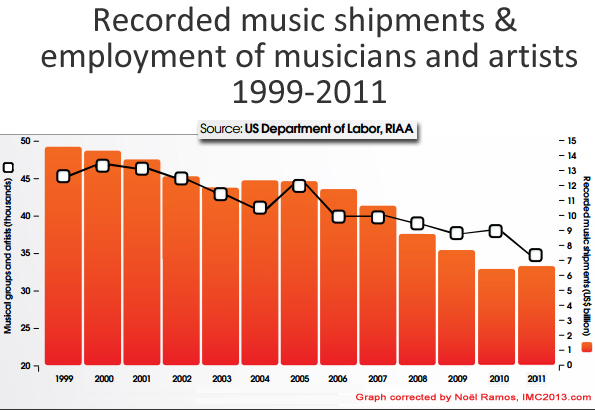 These are self-reported musicians in Bureau of Labor Statistics surveys, though the pressing question is how tightly correlated this is to recording sales.  Sadly, the connection might be stronger than many imagine.

(there’s more on this topic in this RIAA presentation from June, specifically around 14:30…)