Turntable.fm Is Now Being Forced to Remove Tracks…

This couldn’t come at a worse time, especially for a company struggling against sagging traffic levels and fleeting buzz. But Turntable.fm is now being forced to remove tracks from DJ queues, based on – you guessed it – licensing disputes.

This is the type of prompt that users with ‘offending content’ are now receiving. 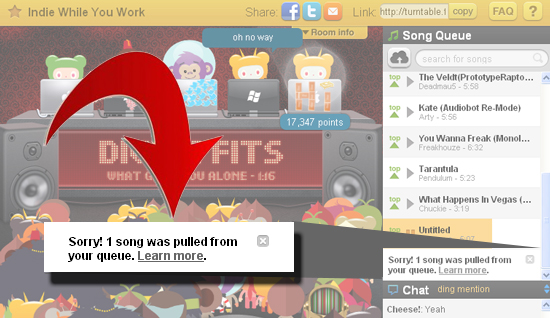 … which leads to this rather vague information. 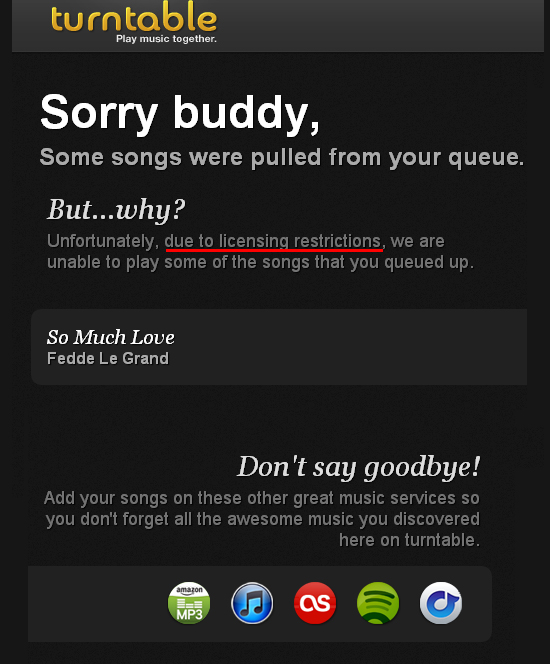 So who’s kiboshing the queue?  The early chatter suggests a number of rights holders, with issues dating back months. Initially, we heard EMI was causing problems, yet Coldplay tracks were easily uploaded.  Fedde Le Grand suggests Ultra, yet Kaskade was added without issue.

Which means we’ll probably be updating as more details and tips come in.  For now, Turntable is asking its users to hang tight with the following message:

“Recently you may have noticed a little alert at the bottom of your queue letting you know that some songs had been removed. Here’s what’s going on with that…”

We license our content from multiple rights holders. Rights holders can be anything from music labels to digital distributors to artists themselves. From time to time, for reasons beyond our control, rights holders will remove certain tracks from our catalog. This will result in certain songs in your queue suddenly becoming unplayable.”