iPhone 5: The Smartphone Revolution Is Now Over

Actually, the iPhone 5 is one svelte device, judging from extensive demonstrations on Wednesday afternoon.

But this isn’t a smartphone revolution anymore, it’s an evolution. And after more than a year of expectation and built-up hype, 5 is a bit deflating.

Of course, when it comes to creating hype, Apple is the best!  But it’s hard to hype a mellowing smartphone lifecycle; the most smashing breakthroughs are in the rearview.  Which is why these are smartphone iterations we’re now experiencing, not reinventions. 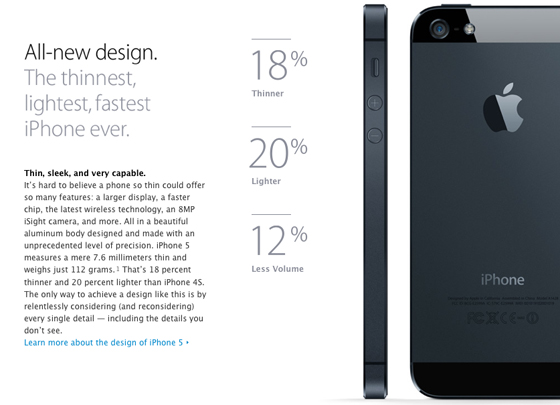 Now, the game is about getting thinner (by 18%), lighter (by 20%) improving over-the-air speeds (3G to 4G-LTE), enhancing maps, boosting battery power, lengthening the device (to 4 inches)… introducing a different, double-sided charger.  Superdesigner Jonathan Ive talked about an improved manufacturing process, and technical superiority over Android devices (and earlier iPhones).  Engineering breakthroughs like integrated touch and display screen layers were all major talking points in San Francisco.

But will the iPhone 5 impress your friends?  Is it worth waiting in line for?  Apple spent the afternoon touting improvements on a theme, down to the last detail…

And now that the smartphone concept has matured, everyone – of course – is fighting over it.  YouTube is no longer an embedded app, though YouTube itself used that moment to deliver its own smashing app upgrade.  Of course, the bigger battleground surrounds Samsung, all part of an epic war against Android and any other contender for this handheld future.

The iPhone is arguably superior to the Android, and certainly cleaner on deck.  But Apple is playing very competitively on price; this isn’t a ‘Mac vs. PC’ game.  The iPhone 5 starts at $199 for the 16GB version, while beefier versions stretch to $399.  Prices on earlier versions, specifically the 4S, are now being slashed or pushed to $0 on the lower end (with contracts, of course).

Perhaps the most alluring upgrades surround iCloud and iTunes Match, a somewhat buggy if tolerable service at the moment.  The iPhone 5 is being ushered alongside an improved iTunes 11 and iOS6, with mobile compatibility in mind.  Other iTunes updates include easier connectivity to Facebook and Twitter, better search, and improved playlisting functionality.  An updated earbud, called EarPods, come packaged with the iPhone 5 and can also be purchased separately.

In other words, all the stuff you know and love, just better and more enhanced.  The iPhone 5 arrives in the US first on September 21st, with a broader, global rollout by year-end.

Written while listening to The xx and DMX.