It’s hard to say if John Lennon would have been thrilled about this development, that is, if he could have conceptualized an ‘iPad app’ in 1980.  But later this month, Beatles and Lennon fans will be able to peruse, cut, paste, email, comment, and tweet dozens of John Lennon’s private letters, thanks to an iOS-exclusive ‘John Lennon Letters App‘. 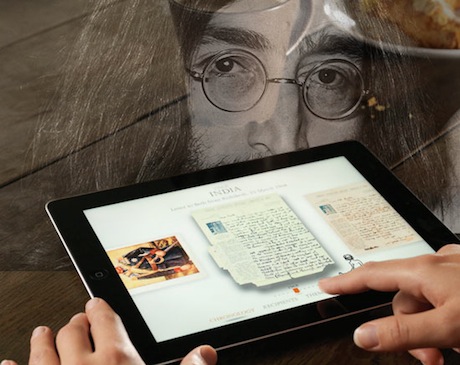 The material is coming from Hunter Davies’ The John Lennon Letters, which contains 300 letters and postcards.  The app features a subset of 78 of those, while sprinkling an extra, app-exclusive 10 (for a total of 88).  Like the book, the app includes all sorts of annotations, though the app applies steroids to the experience.  That includes audio readings from actor Christopher Eccleston, a soundtrack of Beatles music, and, the ability to Tweet snippets and innermost thoughts to anyone, anywhere around the world.

For now, this seems like another Apple exclusive, at least for the initial launch.  Early details here.