Major Labels: We Spend Up to $1.4 Million Developing a New Artist…

It’s a tricky ATM for artists, but major labels claim they’re still spending massive amounts to break new acts.  That is, between $750,000 and $1.4 million, depending on the artist in question.  Here’s the typical breakdown, as supplied this morning by global label trade group IFPI. 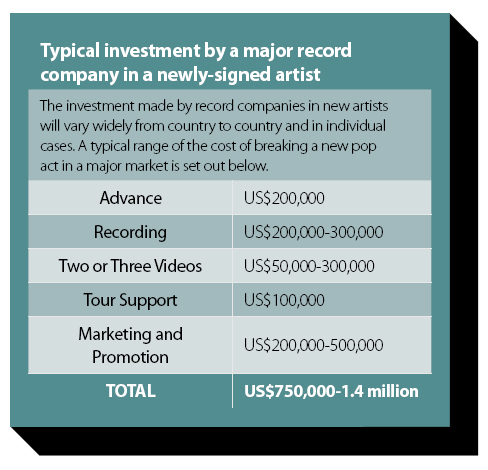 And, here’s the more detailed explanation, also from the IFPI.

Competition between record labels to sign certain artists can be intense. This inevitably drives up the levels of advance on offer. The payment of an advance typically enables an artist to give up their day job and concentrate on writing, rehearsing, recording and performing music. Advances are recoupable against an artist’s royalties from sales, but they are not recouped if sales fail to reach a certain level. Thus it is the record company that primarily bears the risk on the investment. A typical advance from a major label for a new pop act in a major market is estimated to be around US$200,000 and can go much higher in competitive situations. In other cases, advances can be very small or non-existent, with the artist benefiting more from revenue-sharing than upfront expenditure by the record company.

Recording costs can vary widely between individual projects. The involvement of producers, session musicians, professional mixers and studio engineers can all have an effect on the costs. Investment in recordings benefits a wide community of musicians and technicians. Recording costs incurred in major markets can vary between US$200,000 and US$300,000 on a significant project.

Video costs can range widely from project to project. Some of the most expensive can involve high-profile directors, large crews and days of filming. It can cost between US$50,000 and US$300,000 to produce two or three videos to promote tracks from an album in major markets. Such high expenditure is not always needed and videos can be produced much more cheaply. The approach will depend on the needs of the individual project.

Pop acts usually require the largest investment to develop. They tend to involve multiple songwriters, higher recording costs, more expensive photos and videos, the placing of stylists on the payroll and often higher travel costs, perhaps covering parents and chaperones as well as the artists. Other genres, such as dance, urban and classical music, have different cost profiles. In contrast with pop is the development of artists performing folk, alternative and rock music. It is cheaper to record; there are smaller marketing costs, no stylists and generally less expensive videos to produce. In addition, fans of these genres usually buy albums, rather than singles, so it can be easier to secure a return on investment in a folk act.

Emerging artists often need to be heavily supported by record companies. The level of tour support required is highly dependent on the nature of the artist. Typically, tour support is the one area where rock acts require greater investment than pop acts. Artists who require a backing band or orchestra can drive the highest costs in this area. Tour support can cost a major record company upwards of US $100,000.

Marketing and promotional costs are usually the largest expense for a record company. It is this heavy promotion that brings an act to a wide audience, enabling them to develop a broad fan base and opening up the opportunity for an artist to secure revenue from a wide range of sources from live touring to merchandising. A record company can spend between US$200,000 and US$500,000 trying to break an artist in a major market.