It’s Official: Fewer People Are Buying Downloads (for the First Time In History)…

We first reported this a few days ago, based on preliminary data shared by a top-level industry executive.  Now, Nielsen Soundscan has officially revealed that a-la-carte, song downloads are declining in 2013, a potentially historic shift in format preference.

Our source pointed to a year-over-year, 3 percent decline.  The Soundscan stats, published by Billboard, showed a 2 percent decline as of March 15th. 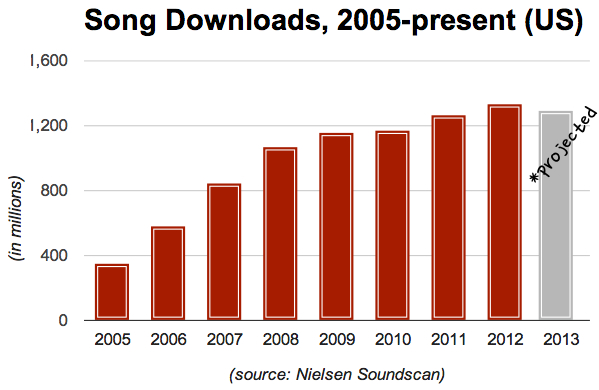 This could be the year that everything changed.  Streaming is now booming, and everyone is getting into this game.  Everyone meaning: Amazon, Apple, Samsung, Spotify, Xbox, Muve, Deezer, Rdio, Rhapsody, and about ten others, which means tons of cash drop-shipped to the major labels and publishers, but not so much paid to individual artists and smaller rightsholders.  Downloads, on the other hand, produce far higher returns and near-complete levels of transparency.

There are reasons to remain calm.  Actually, Billboard journalist Glenn Peoples pointed to a brief, one percent drop in late 2010, a situation quickly reversed by the shutdown of Limewire.  And readers are currently debating the veracity of Soundscan stats, a longtime sore-spot for the data company.  For starters, the most recent Apple stats show massive iTunes gains, though that appears to lump (and disaggregate) album purchases.  Nielsen puts digital albums into a separate pile.

Written while listening to the soundtrack to The Walking Dead.