“I can still remember the day they launched Twitter #music.  Like it was just two weeks ago…”

Is Twitter #music already fading, really, really fast?  This thing is barely two weeks old, though the heavily-hyped app is now free-falling on the iTunes app chart.  After debuting at number 5 among all iOS apps, Twitter #music has rapidly plunged below the 100-mark.

It’s also barely clinging to a top 10 ranking within music. 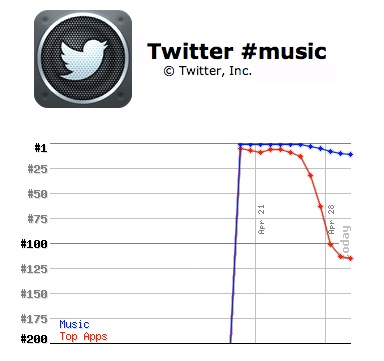 So why is this app going the wrong way fast?  It could simply be too soon to tell, though a major problem seems to be a requirement to subscribe to either Rdio or Spotify to gain access to full clips.  That narrows the group of potential users significantly, and could be rudely violating the freebie expectations of Twitter users.