Which brings us to Pricewaterhouse Coopers, which just issued a report calling for a modest one-percent annual percent growth rate for the US-based music industry through 2017.  Which, spun the right way, means at least things aren’t still sinking. 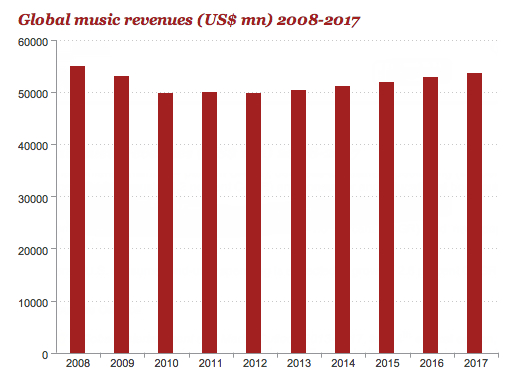 These guys are trying their best to be optimistic, simply because upbeat forecasts generally translate into more report sales.  And worldwide, things are slightly better.  “Globally, the music industry is getting back on track: total consumer spending on music in 2012 was $49.9 billion, a slight fall from 2011,” Pricewaterhouse indicated. “However, annual revenue will start to grow again in 2013, reaching $53.8 million in 2017, a compound annual growth rate of 2 percent over the forecast period.”

But wait: who still reads (and can afford) these reports, anyway?  Indeed, the whole exercise raises questions of whether aggregated music industry reports make sense anymore.  Most of the decline is being driven by physical, which of course carries a monstrous percentage that isn’t getting replaced by digital.  Then again, we already knew that. 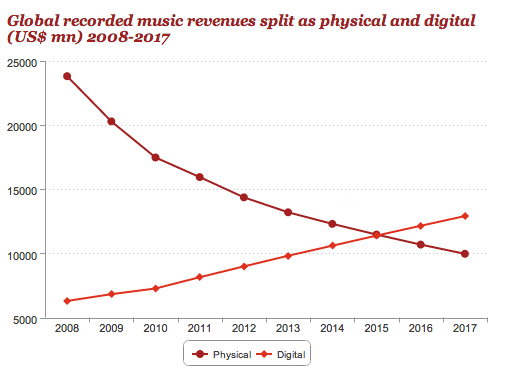 That’s your father’s industry; we’re building the new one, right?  Well, the difficult, look-in-the-mirror question is this: will digital continue to grow?  Or, will downloads taper off, while streaming fails to actualize its hype?  Enter France, which is suddenly showing grim declines across nearly every format, with broader economic malaise and even streaming cannibalization contributing factors.

And what about live?  Here, PwC is more bullish, calling for a 3 percent growth path towards $30.9 million in revenues by 2017.  That will “more than offset the continued decline in recorded music revenues,” according to these data-crunching soothsayers. 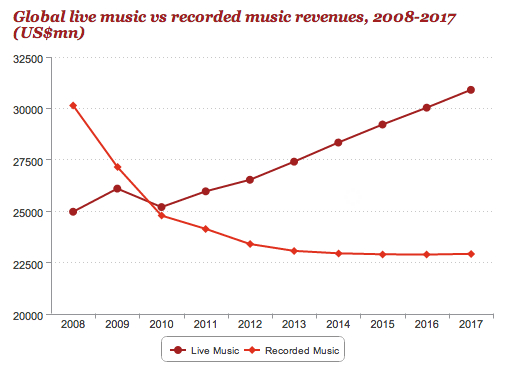 Then again, serious structural questions are also looming in the concert industry as well.  The recent Rolling Stones debacle could represent the moment high-priced, high-fee shows went away, with smart strategists like Kid Rock playing to cheaper crowds.  Meanwhile, tankers like Live Nation continue to employ strategies that involve mega-acquisitions (Insomniac, BigChampagne), mega-salaries, mega-debts and all sorts of oldline thinking that might not cut it by 2017.