Musicians Are Mostly Judged by the Way They Look, Study Finds…

The way a musician looks on stage is more important to listeners than the music being played, according to a study just released.  That is, even though most music fans swear that they are evaluating the music based on the music itself, and little else. 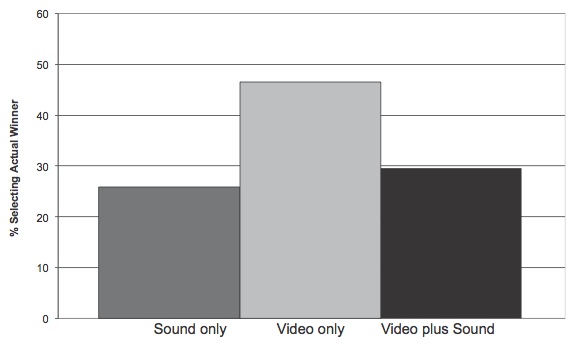 Bulls–t, says Chia-Jung Tsay of University College London, who conducted numerous studies to test exactly how musicians are actually being evaluated.  “People consistently report that sound is the most important source of information in evaluating performance in music,” Tsay concluded.

“However, the findings demonstrate that people actually depend primarily on visual information when making judgments about music performance.”

Tsay assembled groups of both musical novices and experts, and over a series of tests asked them to predict the winners of several prestigious competitions.  Each group was presented with three finalists, and asked to select the ultimate winner (as originally picked by a panel of musical experts).

Here’s where this gets interesting: participants were asked to predict the outcomes using either audio-only recordings, videos with audio, or videos without sound.  Astoundingly, the prediction rate for those watching without sound was dramatically greater than those evaluating with the sound.   In fact, those listening to the music predicted the proper outcome about one-third of the time, the same as chance.

It gets even crazier: in one test, music professionals listening to audio-only recordings made predictions worse than chance, meaning a roll of the dice would have produced a better outcome.

And, perhaps more interestingly, the outcomes were highly similar for both novices and experts alike.  “Both experts and novices appear to be surprised by their own data, and experts in particular reported a severe lack of confidence in their judgment when they were assigned to the video-only recordings, not knowing that their approximations of the actual outcomes would be superior under such constrained conditions,” the study reported.

“The dominance of visual information emerges to the degree that it is overweighted relative to auditory information, even when sound is consciously valued as the core domain content.”

The full study report is here.