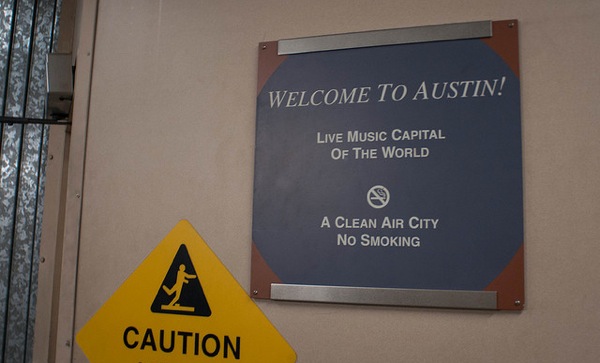 Once upon a time, Austin was an unknown gem nestled in the heart of Texas. The only problem with Austin is that a bunch of very sucky things are now starting to happen to this city, which suddenly makes Austin a far more complicated proposition. For many, Austin kinda sucks these days.

Here are just a few of the nagging problems, according to the honest natives who shared some of their issues.

The world’s most gigantic music festival is really fun, especially if you’re making the choice to visit.  Unfortunately, most Austin natives now systematically avoid major parts of the city while the multi-week SXSW chaos ensues.

And it’s getting worse: a growing number of locals are now taking multi-week or month-long vacations away from Austin just to avoid SXSW.  Others are cashing in on Airbnb, while others struggle through their otherwise-normal routines.  “You have people coming in from San Antonio for SXSW now,” one native explained.

(2) Every other big festival or event besides SXSW.

Because it’s not just SXSW, according to one person who calls Austin home.  Instead, the city has smartly struck gold by hosting a number of big events, including Austin City Limits (ACL).  Which means, thronged hotels, out-of-towner traffic jams, and packed flights are becoming more and more commonplace.

Yes, Austin remains vastly cheaper than the Upper West Side, Santa Monica or SoMA.  But compared to other US cities, Austin’s cost of living is noticeably more expensive and creeping upward.

(4) The highways have become quite congested.

No, not LA congested, but not exactly an escape from ‘big city’ traffic jams.  “The exits are designed badly and always jammed,” one native complained, while noting that many Austinites actually deny that a growing gridlock problem exists.

Another pointed to seriously-long commutes across the Austin expanse, just like those bigger cities you hate.  “If you’re trying to cross the Colorado River, it can be a nightmare,” while another pointed to “90 minute commutes” as not unheard of.

We’ve heard mixed things on this topic.  One pointed to a great, newly-constructed light rail system and good bus coverage, but a lot depends on your A and B.  In many cases, you still have to drive (see #3).

So there’s the whole “it’s really not like the rest of Texas thing,” which appeals to Yankees and is true much of the time.  But those disliking Texas find themselves only partially insulated by Austin ‘weird’ liberalism. And if you aren’t a ‘weird’ liberal, then yes, Austin kinda sucks.

All all the heavy expectations of hipness, weirdness, and ‘we’re not Texas’ taking their toll?  The bigger this city gets on the international stage, the more complex that relationship becomes. “When you’re trying to set yourself apart from a place as large and as bold as Texas, you have to work really, really hard,” snarked HuffPo writer David Landsel.  “Which could explain why everyone walks around here looking so stressed.”

Cities like LA, San Francisco, and New York are way more expensive to live in, but at least you can get a direct flight to pretty much anywhere you need to go.  That is, without unnecessary hassle, delays, connections, or expense.

(9) The summers are sweltering.

Nice weather comes with supremely hot summers, where AC and pool-dunking is mandatory.  Which costs a lot of money: “I couldn’t afford AC when I graduated,” one denizen relayed.  “I’d sleep naked with the windows open, and still wake up sweating.”

So if you hate sweltering heat, then yes — Austin sucks badly.

(10) Everyone plays in three bands.

If you love music, it can be strange dealing with way too much of it.  One music-loving local admitted that there’s just too much live music of the mediocre variety, and sometimes, you just want to talk and eat with music in the background.

Others draw a strange parallel to LA, where everyone’s an actor waiting for a big break.  “‘He plays drums in three bands’ is something you run into a lot,” one resident quipped.