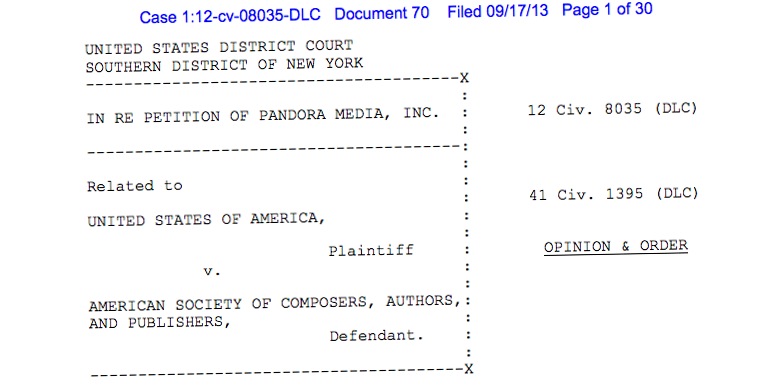 Remember that Pandora is fighting to lower artist royalties on two fronts: Congress and the courts.  And the latter has just sided with Pandora: according to a decision just released by Judge Denise Cote of the US District Court in Manhattan, publishers and their songwriters are not permitted to strike separate, market-driven deals with Pandora if they are also a member of a collecting society (like ASCAP).

Update 1: ASCAP has just responded (see comments below).  We’re awaiting NMPA response; NMPA David Israelite just told Digital Music News that he is reading through the case this morning.  More as reactions and commentary pour in.

The private copyright deals, recently created by some of the largest publishers in the world, forced Pandora into higher publishing rates and were largely driven by the free market (ie, open negotiations between the two parties).

This decision, therefore, nullifies all of those deals, including those struck by Sony/ATV, EMI Music Publishing, Universal Music Publishing Group, and BMG Music, at least until Pandora’s current ASCAP deal ends on December 31st, 2015.

Perhaps more importantly, this summary judgment also prevents any future direct deals from happening, at least for the foreseeable future.

The reason, according to Judge Cote, is simple: those deals broke the law, and specifically a federal agreement related to blanket performance licenses.  The reasons for this relate to a consent decree forged by the federal government and US Department of Justice and societies like ASCAP, one that dates back to 1941.

The result is simple: less money for songwriters, and a lot more money for Pandora.  All of which raises more ugly questions about Pandora, a company that has created an overnight class of hyper-wealthy executives and investors, but left content creators effectively penniless.

That’s not a perspective that Pandora shares.  Here’s a statement that the company just released (note the word, ‘entitled’…)

“The decision makes clear that Pandora is entitled to a blanket license the scope of which is not diminished in any manner by the publishers’ attempts to ‘withdraw’ these rights from ASCAP.”

The complete decision is here.  More ahead.