isoHunt Is Back From the Dead… 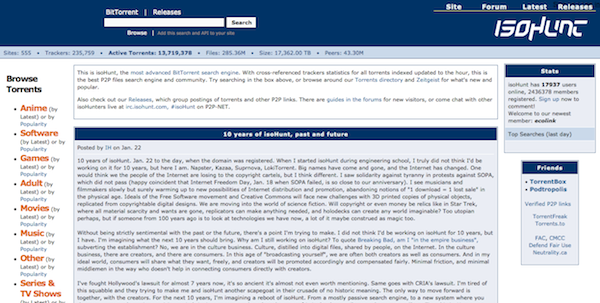 Remember how isoHunt was forced to close down and hand over $110 million to the MPAA?  Well, isoHunt is back…

Because shutting something down is one thing; keeping it down is another.    Initially, a group called ArchiveTeam had intended to back up the entire isoHunt site. When founder Gary Fung heard about this initiative, he shut the site down earlier than the scheduled October 23rd date, thwarting their efforts.

However, all is not lost for isoHunt fans… another team had been working out of the public eye (and Fung’s), recreating almost the entire site.  This team is still working on the copy, but the new address, isohunt.to, is live and looks almost identical to the original.  Forums and user profiles are the only features not active.

The team behind this told TorrentFreak their goal is to preserve a “great part of the torrent world”, saying:

“Media corporations don’t like innovative or competition and isoHunt’s fate is one of the examples of how they deal with it… IsoHunt can definitely be called a file-sharing icon. People got used to it and they don’t want to simply let it go. We want those people to feel like being at home while visiting isohunt.to.”