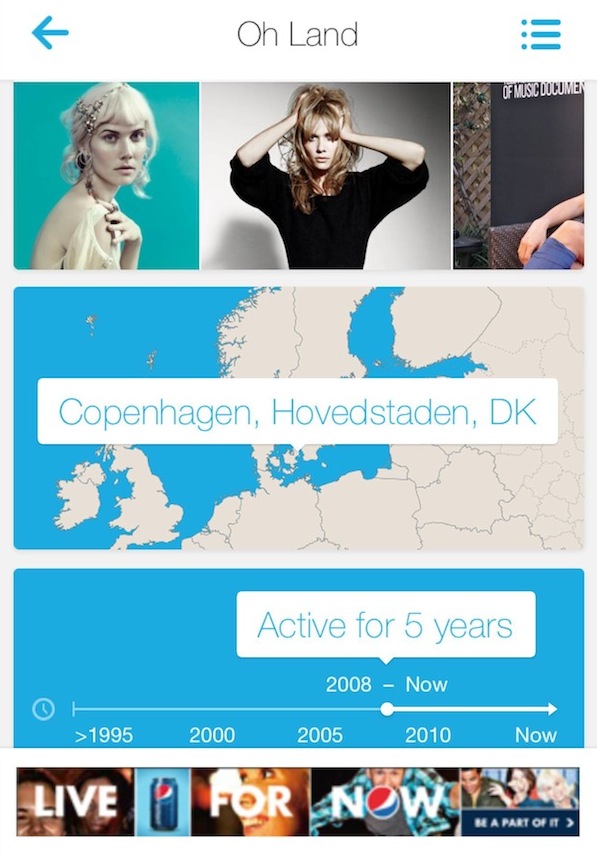 MTV releasing a music discovery app seems laughable at this point. After all, the network has developed far more expertise in mediocre reality TV production than music taste-making.

That said, the new MTV Artists app does have some cool features…

The app launched today for iPhone, with the mission of allowing users to discover music. The concept has been beaten to death, but MTV takes some different approaches. Users can search by artist name, song lyrics, and the ever popular, over-the-air song recognition technology.

The app tells you the usual artist name and song title, with a link to purchase the song in iTunes.  What sets MTV Artists apart is the robust artist profile that follows.  It includes music and live videos, photos, and a feature that will speed through the artist’s top 10 songs in 90 seconds (by the end of the 90-second whirl, you’ll probably know if you’re feeling the artist.)

If you want even more information there are some well-designed graphics that show where the artist is from, and how long the artist has been active.

There are also in-depth bios, MTV exclusive content, social media profiles, tour dates with purchase links, and related artists. This takes the process far beyond what Shazam does, pushing fans to further engage with and buy from musicians… pleasant surprise.

One word of caution: if you’re looking up more obscure artists, then Shazam might be a better choice.  MTV Artists couldn’t identify electronic producers Nosaj Thing and oOoOO, but Shazam could.

It would serve MTV well to expand beyond the artists they know.