Deezer On Pace to Become Bigger Than Spotify in 2014…

Deezer isn’t even in the US, but they’re already the second-largest on-demand subscription service in the world.  And, arguably, on nearly equal footing with Spotify and in the passing lane.

According to details just disclosed by Deezer CEO Axel Dauchez, the company now has five million paying subscribers.  That is more than double the number from last year: in October of last year, Deezer passed two million.

Which means that Deezer is now adding more than a million paying subscribers every 4 months, roughly double the pace of Spotify.

Deezer is also in 180 countries, all part of a ‘save America for last’ strategy that means Deezer is first in many far-flung countries.  That is a strategy fraught with complications, but it’s also giving Deezer a faster growth rate, and arguably, more momentum when they finally hit America.

Now, compare that to what’s happening at Spotify: Back in March of this year, Spotify announced its sixth millionth paying subscriber, though the pace is definitely slowing.

It only took Spotify three months to go from five to six million, but it’s taken more than seven months (at least) to reach seven million.  Deezer is accelerating; Spotify looks to be decelerating.

Part of Deezer’s growth is happening through bundling: the company now has 25 telco relationships throughout the world, with 11 most recently added (and yes, that introduces some counting questions).  But the biggest factor here could be cash: Deezer’s playing with a recently-invested $130 million, with Russian billionaire (and Warner Music Group owner) Len Blavatnik betting gigantic.

By comparison, Spotify has nearly $300 million invested, but has burned through nearly all of that. 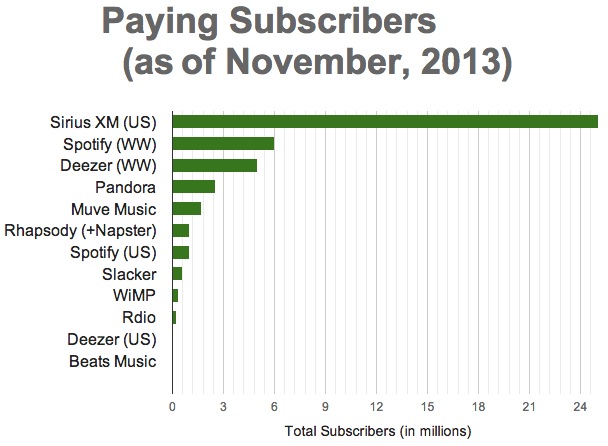