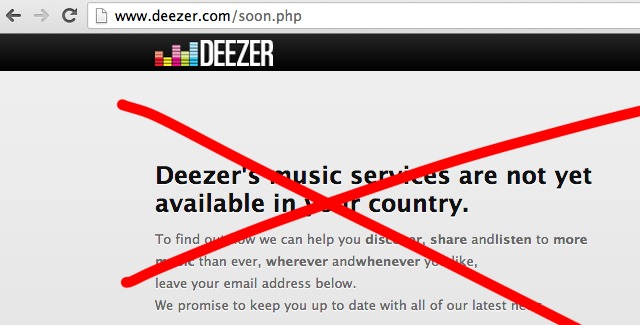 Deezer is now preparing a grande entrance into the United States in January, 2014, according to sources inside the company and those with knowledge of the plans.  Here’s what we know so far:

I. ‘Spotify Is Vulnerable’.

The timing comes at a potentially vulnerable moment for Spotify, whose expansion into the United States has been a very costly endeavor.  Spotify has well past one million paying Americans at this point, but the company is getting dangerously close to burning through its available funding.  At present, Spotify is rumored to be securing a large funding round of roughly $200 million; earlier reports pointed to a high balance bank loan.

Hovering in the background is the dabbling billionaire Len Blavatnik, whose massive fortune has given the company a $120 million-plus runway.  Blavatnik, who also owns Warner Music Group and wildly overpaid for Parlophone, is likely to offer even more economic firepower ahead.

II. The Race for Global Supremacy.

Either way, Spotify’s lane is about to get even more crowded.  Over the past few years, Deezer and Spotify have been carefully dancing around one another, with Deezer CEO Axel Dauchez pursuing a strategy that involves smaller and more far-flung countries.  As a result, Deezer now has a presence in 180 countries, though the US is arguably the most important missing piece.

Meanwhile, Spotify is rumored to be considering a similar global expansion, with far-flung, ‘smaller fish’ countries that had previously been ignored.  And part of the motivation for this goes beyond Deezer, with YouTube Music an increasingly important consideration in this picture (see below).

Meanwhile, executives at Spotify are crying foul on a recent subscriber claim by Deezer.  Earlier this month, the French streaming service proclaimed 5 million worldwide subscribers (compared to Spotify’s nearly 7 million), though Spotify complained that most of those ‘paying’ subscribers are actually bundled into existing, broader mobile contracts.

Spotify’s subscribers, on the other hand, are almost all direct-paying clients.

Which means, Spotify is potentially 6 or even 7 times as large as Deezer, at least on the yardstick of direct-paying subscribers.

Not to be discounted in this discussion is Muve Music, whose nearly-two million paying subscribers are all part of bundled mobile relationships (ie, packages that includes texting, browsing, email, music, etc.)

So how will Deezer make its entrance?  According to sources to Digital Music News, Deezer is entertaining the possibility of entering the American market with a major mobile carrier, though it was underscored that this is only a possibility.  Verizon Wireless stuck out as one possible partner, though in all likelihood, Deezer will enter the market on its own.  ‘It doesn’t look like there will be a carrier partner as of now,” one source told DMN.

“But they will definitely be here in January.”

Want to sprinkle some more spice onto this discussion?  Enter Microsoft, rumored to be in early-stage discussions with Deezer that could result in an acquisition.  Microsoft, a repeatedly epic failure in the digital music space, could be eyeing Deezer as a way to finally achieve traction.  “They aren’t in deep negotiations at this point, but it’s definitely on the table,” a source relayed.

And, weighing very, very heavily on this discussion is YouTube Music, whose music streaming service is expected to arrive by Christmas.  That has the potential to create another very serious problem for Spotify, and, according to one source, could be motivating accelerated expansion plans into “the ROW,” corporate-speak for “rest of the world.”

Either way, Spotify now has two heavily-funded, extremely aggressive competitors to deal with: Deezer (with Blavatnik’s support), and YouTube Music (with the nearly-bottomless support of Google). That could grow the pie overall, but make life extremely difficult for the competitors involved.

Smaller players like Rhapsody, who are already losing money (and possibly subscribers), may have difficulty surviving 2014.