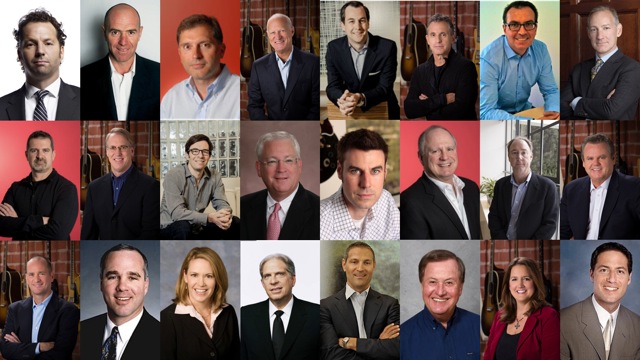 (Live Nation Entertainment Executive Leadership and Board of Directors, 2014.)

Blues was invented in America, and so was Rap.  Blues led to Rock n’ Roll; Rap transformed the entire landscape of modern pop music.  Simply stated, without the African-American influence, American music would probably suck.

So why, if the influence of Black artists on music is so massive, are there hardly any powerful Black executives in the modern music industry?

Why do executives like Troy Carter and Chuck D always feel like ‘token Black guys’ at major music industry events?

And it’s way worse on the technology and live concert side, i.e., the biggest growth areas of this industry.

Let me take it a step further: off the top of my head, I can’t name one Black executive from Pandora, Live Nation, Apple, Spotify, AEG, or SXSW, just to pluck from the above list.  That doesn’t mean they don’t exist, but for the most part, they are not in prominent, influential positions at these companies.  And, sadly, there’s a distinct possibility there aren’t any influential Black executives on the payrolls at many of these enterprises.

But Spotify is Swedish, right?  That’s the country of origin, yes, but the US is their biggest and most important market.  And we have Black people here (but, not here).

Thank God this isn’t my father’s music industry, when the greatest, most creative Black artists toiled in poverty (while being mercilessly copied and exploited by white artists).  When famous African-American musicians battled a tricky maze of racism and violent threats while touring America.  When there were two types of radio stations, Black and white.

When someone like Jay Z couldn’t have possibly existed.

But comparing this industry to the industry of the 50s and 60s doesn’t really accomplish much.  We’re out of the dark ages, sure, but there isn’t a dark face in the boardroom to prove it.

And if only the most extremely talented, insanely intelligent, and amazingly lucky Black executives are making it, then there’s still a big problem.  In the music industry, in music technology, and America at large.

Written while listening to The Black Album by Jay Z.