We all hate those pesky “video not available in your area” YouTube notices: 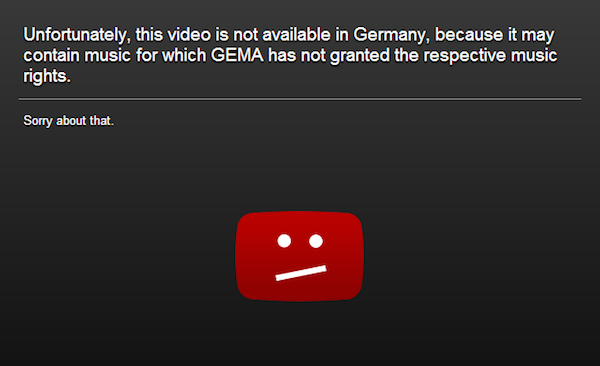 But in this case, why is YouTube calling out a specific entity for not granting them rights? Seems pretty passive aggressive.

GEMA is a German copyright organization, representing 68,000 members in Germany and many more from the rest of the world.  In 2009, GEMA opted not to strike a licensing agreement with YouTube after the pair failed to agree on streaming rates.

In 2010, discussions deteriorated and GEMA sued YouTube.  Subsequently, the rights organization wanted YouTube to block titles of videos that were being illegally uploaded by users.  In 2012, the Court of Hamburg decided YouTube was responsible for these infringing videos and needed to make sure they weren’t on the platform.

YouTube keeps titles controlled by GEMA off the platform, but they also put up a notice blaming GEMA for blocked videos.  Since GEMA represents a lot of members, this message pops up frequently.

On top of that, GEMA says YouTube goes out of its way to block unrelated videos and then puts up the message blaming them.  Understandably, GEMA took YouTube to court, alleging that YouTube’s finger-pointing has been damaging their reputation.

The District Court of Munich agrees with GEMA, saying YouTube has illegally made them out as a villain. The court said YouTube should make it clear that the videos are unavailable because of a disagreement between both parties.

The verdict is not yet finalized. If it goes through as-is, YouTube could be fined up to €250,000 for every video that continues to display the message.

“The decision sends an important and positive signal: It’s not GEMA preventing the enjoyment of music on the Internet.  It seeks merely to license YouTube, like all other music portals.  Our concern is that the artists participate in the economic exploitation of their works and can earn a livelihood in the future.”