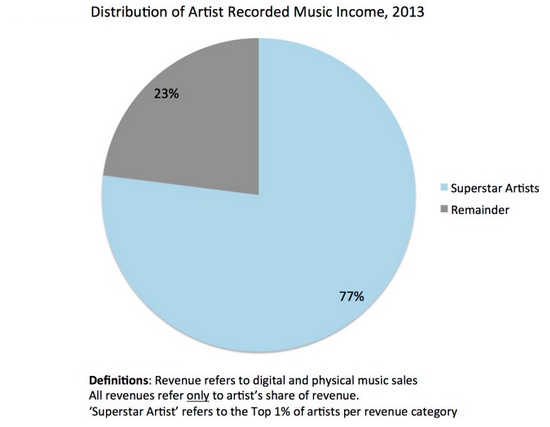 Whatever money is left in recordings, you’re probably not making it.  That’s the harsh conclusion offered by Mark Mulligan of MIDiA Consulting, whose data shows a more extreme imbalance towards superstar artists than previously thought.  “The music industry is a ‘superstar economy,’ that is to say a very small share of the total artists and works account for a disproportionately large share of all revenues,” Mulligan noted.

“This is not a Pareto’s Law type 80/20 distribution but something much more dramatic: the top 1% account for 77% of all artist recorded music income.”

In other words, the exact opposite of the Long Tail, a theory that seemed exciting at the time but has now been thoroughly disproven (MIDiA’s report is titled The Death of the Long Tail: The Superstar Music Economy).  Because instead of embracing choice, consumers have actually been completely overloaded by it.  The result, according to Mulligan, is a ‘tyranny of choice‘ that makes consumers less likely to explore, and more likely to glom around mainstream artists. 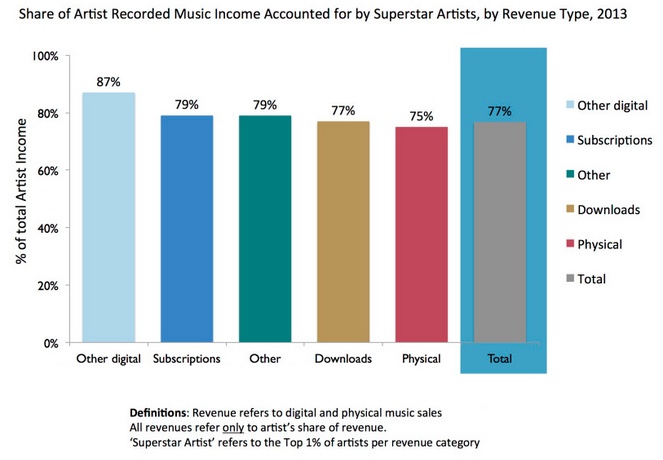 There is good news, however: although recorded music earns far less in 2014, the percentage earned by artists has increased.  Specifically, artists are now capturing 17 percent of recorded revenues, up from 13 percent in 2000.  The only problem is that these gains are only being enjoyed by a tiny minority of artists.