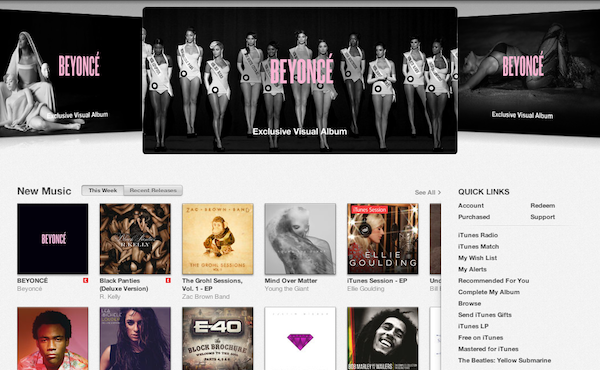 No, it won’t be available on Spotify, or any other streaming service.  Not on the album release date, and maybe never.

Which is exactly how Apple is structuring this deal, according to executives sharing preliminary details with Digital Music News.  “[iTunes] and Beyoncé are very happy with the results of that exclusive,” one source close to Apple shared at SXSW, referring to the ground-breaking launch several months ago.  “So you’re going to see something similar coming up, [unnamed artist] really likes the idea.”

“I’m not sure it will top Beyoncé, but it will be ‘Beyoncé-esque’ let’s just say.”

Sources insisted that we not publish any names, though this is a major artist that you’ve definitely heard of.  In fact, there are multiple, big-name artists that could eventually finalize ‘Beyoncé-esque’ deals, depending on how things pan out.  “Spotify won’t get this, [nor will] any streaming service for that matter.  You will have to buy this from iTunes.”

Asked if this will be a video-intensive release with a surprise release date, one of the sources only pointed to a healthy mix of video and audio.  But there probably won’t be videos for each and every song.  In terms of release strategy, the artist under discussion is deciding the best way to release, with a well-orchestrated, pre-release notification to fans more likely than a flat-out surprise.

But one thing is certain, according to our sources: this artist will be working direct-to-fan channels like Twitter, email, Facebook, SMS and several other channels ‘very aggressively,’ with ‘special giveaways and bonuses’ for the most dedicated and interested fans.  “There may be something to reward the best fans,” one of the sources with knowledge of the deal relayed, while pointing to a possible live concert tie-in.  Beyond that hint, there were no further details on that aspect.

“[The artist] really likes what Beyoncé did, the independence of it.  Streaming might come later, but that isn’t decided yet.” 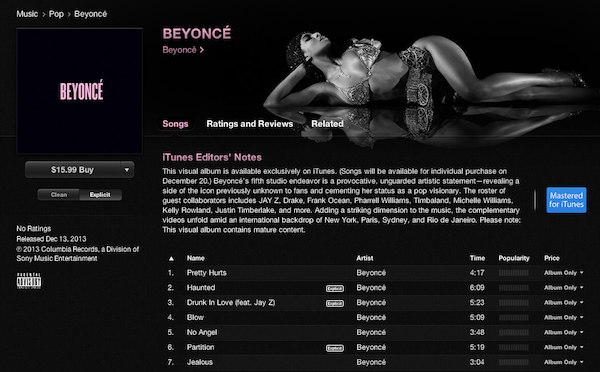 There’s also the money aspect, an area where Spotify falls flat.  “There’s the whole ‘if you don’t make it available on Spotify you’re cheating your fans’ thing,” one source continued.  “But [this artist] doesn’t really buy into that thought.

“[The artist] feels there are compensation problems [on streaming platforms].”

And what happens to the rest of the audience, ie, those that only stream and rarely (if ever) download?  “They don’t expect any backlash off of this.  The fans that matter will buy it.”