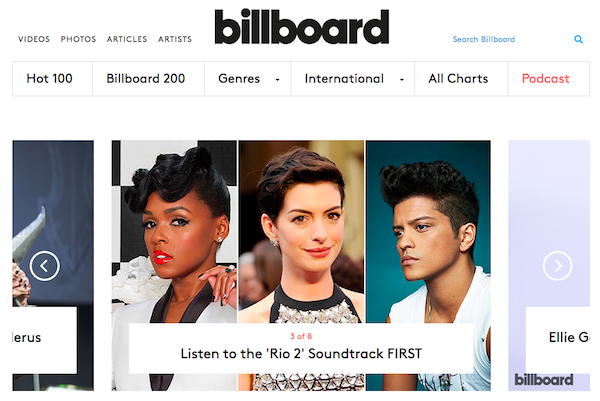 Billboard has been drifting away from its role as a trade publication.

Under the direction of Janice Min the magazine is shifting its focus towards attracting a general audience.

This means more articles about celebrities and lifestyle topics.

All of this has led to a lot of  hirings and firings over the past few months, a trend that continues. Billboard has fittingly just hired a bunch of people from Conde Nast Traveler, Esquire, Vanity Fair, and more.

The publication recently added a fashion editor to their ranks, hiring Tasha Green. She was previously men’s style editor at Wall Street Journal and also contributed to WSJ’s Off Duty section and magazine.

Eileen Daspin has been added as a lifestyle / business journalist and magazine editor. She has previously been an editor at ThomsonReuters, Time, W, Wall Street Journal, New York Post, and American Lawyer. Frank DiGiacomo joins Billboard from Vanity Fair, where he was a contributing editor. Carson Griffith comes from New York Daily News, where she was a gossip columnist and senior editor.

In the art and photo departments:

With all these hirings, who is being pushed out of Billboard now?

Designers Andrew Horton and Andrew Ryan are also leaving the company after their “tireless work” on the Billboard redesign.