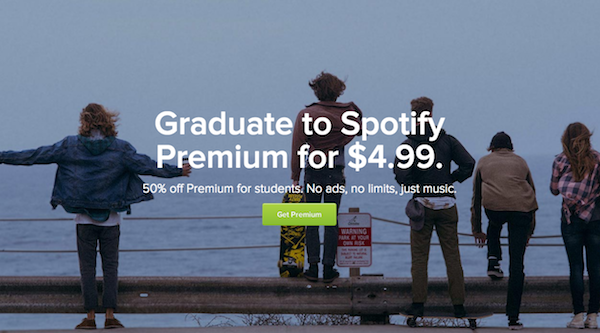 Spotify has an announcement that should get them some new paying subscribers, although these subscribers would be paying 50 percent of what everyone else pays.

Spotify is now offering a 50 percent discount on premium for students. The discounted rate will be $4.99 a month instead of $9.99.

Students must provide proof that they are in school to get the discount.

I, for one, will be capitalizing on this deal.  I’m down to pay $4.99 instead of the $9.99 I’m paying now.  I suspect other students will downgrade to the lower price as well.

The question is what this means for artists.  Just yesterday, there was a Facebook discussion on my wall fueled by Nick Thayer’s statement that he earns “less than the price of a beer overall” from Spotify and YouTube.  My Facebook friends (who are in school) decided $9.99 was a more than fair price for Spotify Premium.

This deal could sway students who sadly aren’t willing to pay $9.99 and resort to Spotify free and illegal downloading instead.

The discount comes just days after Beats Music claimed to have raked in more than a half-million paying subscribers in two months.   Spotify hasn’t made any subscriber announcements since early 2013, when pointed to their 6 millionth paying subscriber.

In other Spotify news:

The streaming service is completely changing their apps system.  They are no longer accepting app submissions through their App Finder.

“For existing app developers this will not mean any changes to your app. As long as your app is on API 1.x it will continue to be available in the Spotify desktop app. Furthermore, we’ll honor any approvals we’ve already made and bring them through the process.”

Spotify has released a Beta iOS SDK (software development kit). This is a huge change, considering apps have only been available on the desktop version.

If you want to release a new desktop app it looks like you’ll have to wait, Spotify is working on new APIs and SDKs.