An Artist Asks Facebook: “Why Do I Have to Pay to Reach My Fans?” 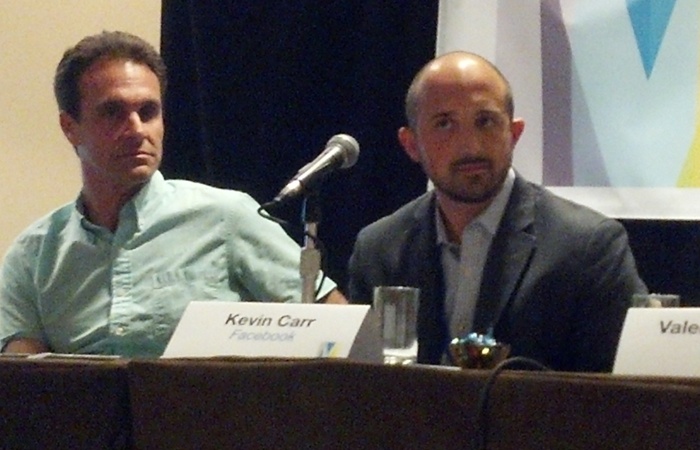 At the Music Biz 2014 conference this week in Los Angeles…

Tony Groticelli, UMG Nashville (Moderator): Do you have a question over here?

Artist in the audience: Yeah, my question is for Kevin [Carr].  It’s that, I understand that it’s becoming more competitive, but you have bands, artists, labels who have spent tons of money, countless hours… years building their Facebook fan bases.  And now, you’re charging them to reach the audience that they paid and spent hours and hours and countless resources to build.

So are you going to do anything for those artists who are now not able to reach those fans that they spent so much time and money building?  Do you have a program for artists and labels to help promote them as a make good, for making them pay to reach their fans?

Kevin Carr, Facebook: Sure.  I really think it comes down to – because there are artists and there are actors and there are brands  that are reaching  a ton of their fans though.  So not everyone has had that happen —

Artist: — but, if you have 30 million fans, you have to spend tens of thousands of dollars to reach those fans.

Carr: It’s, it’s not a matter of — we’re not trying to punish anyone.  And it’s not like we’re trying to turn on a money machine.  It really comes down to authentic content, reaching the person.

But I have to pay for that now?  What are you going to do for that?  Is there any plan to help?

Artist: What’s more authentic than that? Hey, my fans, come see me here —

Gino Sesto (Dash Two):  I have to come to his defense a little bit.  You have to realize that… not all of those fans were paid for, it was a free platform probably for most of the fans that he acquired.

Artist: No no, but he spent time and money developing that fan base —

Sesto: — right, but he was able to speak to his audience at the time.  The problem is that the platform has become mature, and they’re not trying to be like Twitter and just have it to be an open firehose.  So they’re trying to curate the content  a little bit for the people.  I don’t know exactly how the algorithm works, but I have to assume that if someone is interacting with the artist a bunch of times, they’re probably going to see posts.

Artist: Yeah but to get to 30 million fans, that takes a lot of time and money, and then to have to pay tens of thousands of dollars to reach those fans.  That’s kind of tough.

Carr: I totally empathize, I totally understand and I’ve talked to other folks that have had the same experience.  I don’t have a program that is going to give out organic reach.  It really comes down to what I was saying before, is that the authentic voice reaching the person that wants to see that.

It’s become much more crowded, it’s become very competitive.  And, news feeds for one person – you could have one person that’s eligible to see 1,500 posts in a day.  But we’re trying to show the ones that out of all those artists, all the years that they’ve acquired all those Likes and those Pages, we want to show the ones that are relevant so they stay engaged on Facebook.

Groticelli: Let’s go to another question —