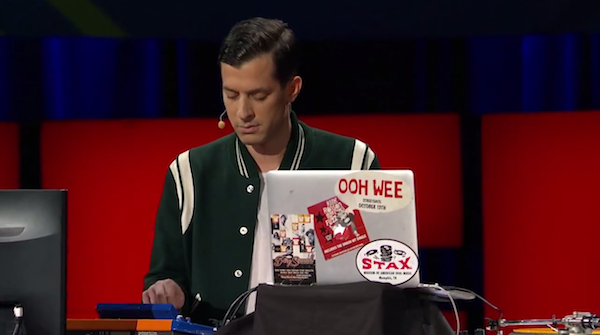 Mark Ronson: “See, thirty years ago you had the first digital samplers, and they changed everything overnight. All of a sudden, artists could sample from anything and everything that came before them. From a snare drum from the Funky Meters, to a Ron Carter bass line, to the theme from The Price is Right.

Albums like De La Soul’s 3 Feet High and Rising and the Beastie Boys’ Paul’s Boutique looted from decades of recorded music to create these sonic layered masterpieces that were basically the Sgt. Pepper’s of their day.

But the thing is,  they were sampling those records because they heard something in that music that spoke to them, that they instantly wanted to inject themselves into the narrative of that music. They heard it, they wanted to be a part of it, and all of a sudden they found themselves in possession of the technology to do so. Not much unlike the way the Delta blues struck a chord with The Stones and The Beatles and Clapton, and they felt the need to co-opt that music for the tools of their day.

You know, in music, we take something that we love and we build on it.

Since the dawn of the sampling era there’s been endless debate about the validity of the music that contains samples. You know, the Grammy committee says that if your song contains some kind of pre-written or pre-existing music you’re ineligible for Song of the Year.

Rockists, who are racist but only about rock music, constantly use the argument to devalue rap and modern pop. And these arguments completely miss the point because the dam has burst. We live in the post-sampling era.

We take the things that we love and we build on them. That’s just how it goes.

And when we really add something significant and original and we merge our musical journey with this, then we have a chance to be a part of the evolution of that music that we love and be linked with it once it becomes something new again.“