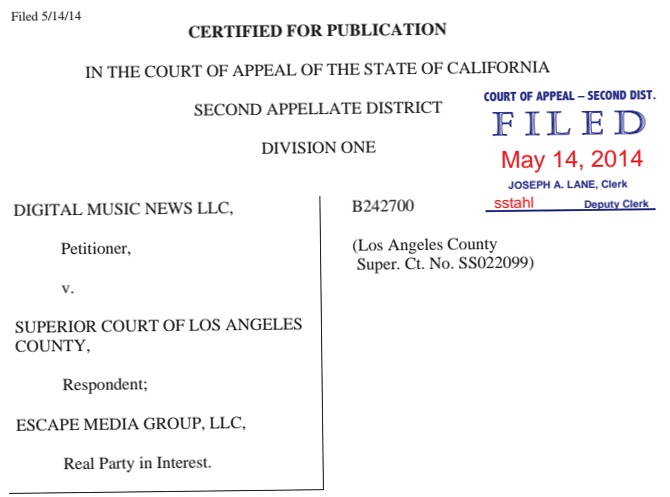 Grooveshark will not be permitted to search through Digital Music News’ servers after all, thanks to a reversal issued by the California Court of Appeals, Second Appellate District.  The Appellate opinion summarily dismantled a range of arguments concocted by Grooveshark and its parent, Escape Media Group, and ultimately nullified an earlier decision by the California Superior Court for the County of Los Angeles (ie, the trial court).

Most importantly, the court firmly declared that users have the right to anonymity on the internet, and that courts should take steps to protect that right.

That guiding and important principle, combined with serious problems in Grooveshark’s case, means that any earlier decisions granting subpoena access to Grooveshark will now be vacated.  Nothing on DMN will be opened to outside parties for inspection.

“The trial court is directed to vacate its order granting Escape’s petition to enforce the subpoena and to enter a new order denying the petition. The writ of supersedeas is dissolved. Digital is to recover its costs on appeal.”

The decision was bluntly unapologetic and lopsided, raising some questions about Grooveshark’s legal strategy (led by Rosenberg & Giger and McPherson Rane).  After a tough round of questioning during ORAL arguments in Los Angeles, the multi-judge panel found Grooveshark’s subpoena against Digital Music News to be flimsy on a number of grounds, including the all-important question of whether there was any evidence at all worth pursuing on Digital Music News’ servers.

“Escape’s need for the discovery is practically nonexistent.”

The legal battle between Grooveshark and Digital Music News revolved around a pair of anonymous comments, posted in late 2011.  The commenter, who claimed to be a Grooveshark employee but was only identified only as ‘Visitor,’ outlined a range of very serious copyright violations that were ordered by top executives at the company.  In essence, the ‘employee’ offered details that, if true, would have potentially destroyed Grooveshark’s DMCA-based copyright defense.

But since the subpoena battle with Digital Music News started, Grooveshark’s DMCA defense has been slapped down in a separate, New York State proceeding against Universal Music Group.  Which raises the question: why does information about that defense matter anymore?  “Escape’s DMCA defense was ordered stricken by the Appellate Division of the New York State Supreme Court, which held the defense immunizes a service provider only from federal copyright claims, not state common law claims such as those at issue here,” the Appellate decision stated.

“The defense therefore raises no currently disputed ‘fact that is of consequence to the determination of the action,’ rendering Visitor’s comments irrelevant.”

But even in the event that the DMCA question remained on the table (as in federal court), the judges questioned what purpose unearthing the identity of ‘Visitor’ would ultimately achieve.  After all, this is a comment on the internet, not an investigation of Escape’s servers or an incriminating email.  “Visitor said two things of consequence: (1) He/she is an Escape employee; and (2) Escape administrators encouraged employees to infringe on copyrights.

“Escape apparently believes disproving one or both of these out-of-court  claims would somehow disprove UMG’s allegations. We fail to see how.”

And why is Grooveshark leading a ruthless and expensive campaign to unearth the identity of a… blog commenter?  The judges didn’t miss the absurdity in front of them.  “Such commentary has become ubiquitous on the Internet and is widely perceived to carry no indicium of reliability and little weight,” the decision continued.  “We will not lightly lend the subpoena power of the courts to prove, in essence, that Someone Is Wrong On The Internet.”

Disappointingly, the Appellate judges declined to address important questions related to the subpoenaing of deleted data.  Digital Music News had already deleted the data in question, and it is highly unlikely that it could have been recovered; at what point is it unreasonable to subject a company to extreme discovery?  That likely leaves the door open to more abuse: in his argument before the judges earlier this month, Digital Music News attorney Paul Alan Levy of Public Citizen Litigation Group warned that over-reaching forensic investigations would happen again, often against parties that have far fewer defenses.

But there was an important precedent related to online privacy.  In no uncertain terms, the Court placed great weight on the privacy of the commenter involved, and the all-important right to remain anonymous and free from reprisal.  “Even if Visitor’s identifying information was reasonably calculated to lead to admissible evidence, his or her right to privacy under the California Constitution would outweigh Escape’s need for the information,” the judges continued.  “‘The right to speak anonymously draws its strength from two separate constitutional wellsprings: the First Amendment’s freedom of speech and the right of privacy in article I, section 1 of the California Constitution.’ (Rancho Publications v. Superior Court, supra, 68 Cal.App.4th at pp. 1540-1541.) .

“The California Constitution provides that all people have a right of privacy.  This express right is broader than the implied federal right to privacy.”

The full decision is here.