If the math on ‘regular’ college is starting to look suspect, what about the math on music schools and conservatories? Perhaps the Berklee College of Music, a place where the annual cost of attendance can quickly soar past $62,000, is now answering the question on its own.  Because when you come out the other end, the real world is an increasingly brutal place for musicians.  And, ironically, a report from Berklee itself is now reaffirming this reality.

According to a rather dreary report on musician jobs released by the school this week, most musicians are struggling with moderate salaries (at best), are underemployed in their chosen craft, and are working multiple gigs to get by.  And, session gigs, recording gigs, and salaried positions are all on the decline.

Here’s a quick summary of Berklee’s report on the state of musical employment in 2012.  The findings were based on a sample of 5,371 musicians and composers, conducted by the Future of Music Coalition (and released this year).

42 percent said they derived all of their personal income from music.

(2) A substantial number need to supplement their musical salares with non-musical income:

The average estimated music income was $34,455.

(3) A vast majority paid handsomely for a music degree (with a significant percentage likely in debt):

80 percent have a college degree or higher.

(4) Most musicians are working multiple gigs, non-stop to make these moderate salaries:

More than half of respondents are earning money from three roles or more.

It gets worse, according to the Berklee stats.  Because over the past five years — undoubtedly a stressed-out period economically in the US, world, and music industry — musicians have watched their earnings power and available work erode.  In fact, most categories are fighting to maintain their previous levels of employment, or struggling under declines. 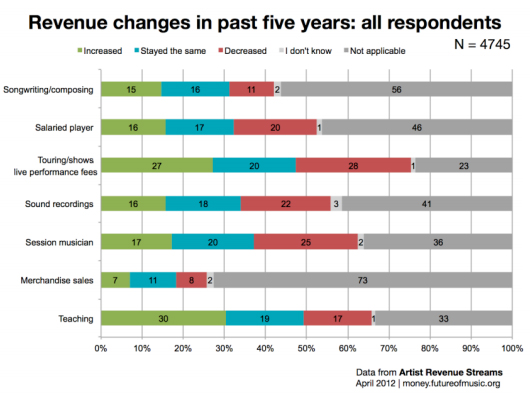 But wait: didn’t we already know this? At least at a top level?  The answer, of course, is yes: parents are notorious for trying to steer their children away from music, simply because the jobs are erratic and the pay is lousy.  But for those committed to their passions, perhaps the question is whether it makes sense to commit hundreds of thousands of dollars to a musical education that will probably lead to a life of Ramen and long-term debt.  Or, if that’s even a luxury young musicians can realistically entertain anymore.

The full report, which includes a range of salaries and music-related job details, can be found here.