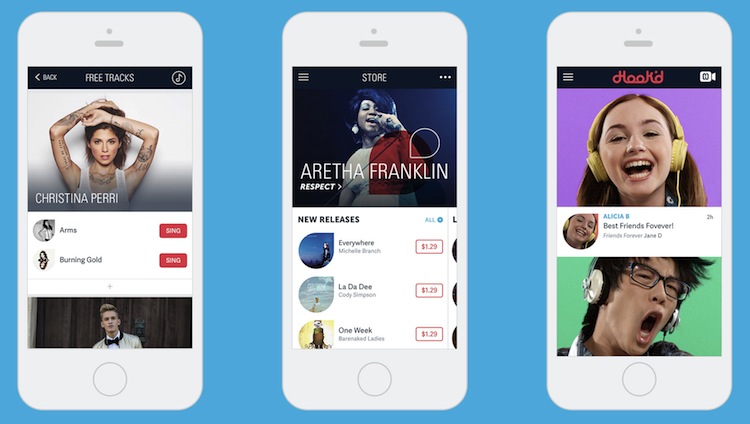 Socially focused apps are being released every day, and it feels like the number of new apps keeps growing exponentially. This is especially true for music-oriented apps.

Which is fitting, since the digital generation is always online, constantly using apps to listen to music, always interacting with our friends, and incessantly sharing pictures of every concert we go to.  In fact, a recently released report from MIDiA Research says 85 percent of  “digital natives” say music is an important part of their life.

Enter Hook’d, a new social music app that was released on July 10th. The app kind of feels like Vine, that is, if your Vine feed was full people singing into their phone camera.

Users record 30 second clips of themselves singing the hooks of their favorite songs.  The app has a library of master recordings licensed from the major labels.

Users sing vocals over the music, and can listen to the vocals in their headphones as they record if they so desire.

Users can also add effects to their voices in real time as they sing, such as reverb, echo, and pitch fix.  Hook’d is currently working on additional audio effects and video effects.

Finished videos end up on the Hook’d stream and can be shared on a variety of social networks, including YouTube. Hook’d has agreements with Warner, Sony, Universal, and various publishers that allow users to legally upload their videos onto YouTube.

Bob Taub, the founder of Hook’d, says the labels actually “enthusiastically approve“ of Hook’d’s use of their catalogue. He says this is because Hook’d provides a new way for fans to connect with the music and artists they love.

And how’s Hook’d doing against the clutter?  Taub says the app is doing better than expected and that they’ve passed their initial user targets, although he didn’t give specific numbers.

The app itself is free, and some tracks are available for free.  But most tracks cost $0.99, or users can pay $3.99 per month to unlock the entire music library.

First impressions?  I have to admit, watching Hook’d videos feels a little awkward. It’s weird to watch people I don’t know singing close up, staring into the camera. It’s highly unlikely that I would ever record a Hook’d video, but plenty of other people are engaged.  The concept itself is interesting from a technological perspective.