Universal Music Made $400 Million Off the Beats Acquisition. Artists Made $0… 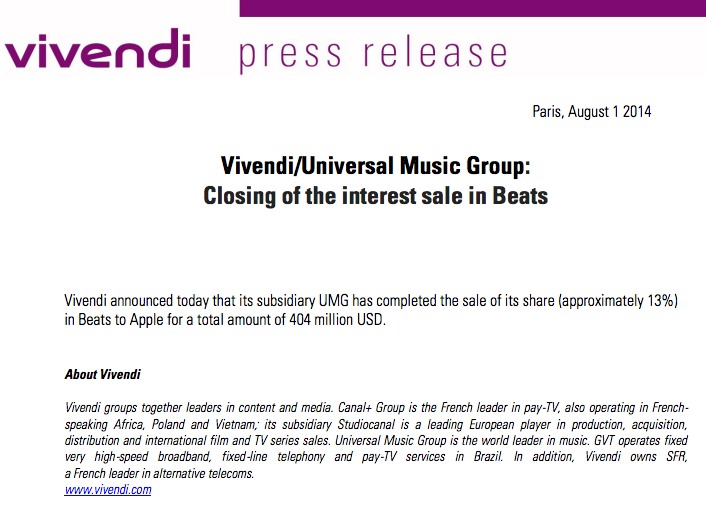 Last month, sources pointed Digital Music News to sizable ownership stakes in Beats by the three major recording labels.  But those shares are bigger than initially thought: according to an announcement issued this morning by parent Vivendi (above), Universal Music Group carried a 13 percent share in Beats prior to the sale, which translates into a massive, $404 million payout from the Apple sale.

The same sources, which include a major label attorney, have noted that none of that money will make it back to artists, based on the language of most artist contracts.  The standard contractual language stipulates that one-time payments to the labels from streaming services, either in the form of upfront advances or equity cash-outs like this one, are simply not shared.

How Streaming Services are Screwing Lady Gaga (and Every Other Artist)

In other words, if it isn’t a stream directly attributable to an artist on the label, there is no payment.  “They will get nothing,” one major label attorney flatly told Digital Music News, while insisting on anonymity.

“There’s nothing in the [artist] contracts that says the label has to share those earnings.  They draft it like that so the artists get nothing.”