What You’re Not Seeing In the Comments Section… 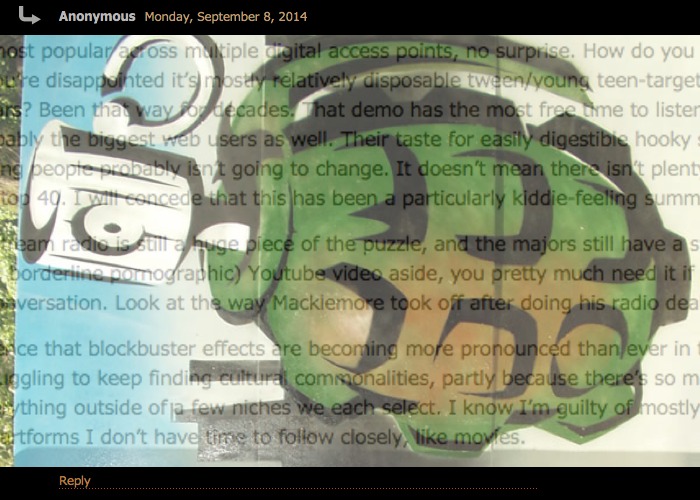 I’ve lost some really good writers to our comments section.

It’s not that they couldn’t take a hit or two.  It’s just that the barrage of criticism and hostility was affecting them mentally, and in some cases, making them write vanilla articles guaranteed to minimize blowback.

In every case, I’ve tried to coach away the issue.  For starters, people typically don’t comment unless they’re engaged, and a cantankerous comments section should be viewed as a success, not a failure.  Simply stated, people don’t comment on smaller, less relevant and less ballsy sites, and a very large percentage of comments are helpful and well-informed.

So why let a few bad comments ruin an otherwise great debate?

But more than that, when you challenge the dogma and status quo of an industry, you’re almost guaranteed to draw a vitriolic response.  This is because people don’t like it when you disagree with their religion, they hate it when you dismantle their fragile constructions of what’s happening out there.  Which is exactly what we do almost every day.

I’ll take it a step further: I don’t really regard our comments section as a problem at all, which might explain why I’ve taken great pains to make it as open and unfettered as possible.

It’s also why I spent three years defending the anonymity of our comments section against Grooveshark and its owner, Escape Media, ultimately winning decisively in the California Court of Appeals.  And it’s also why I’ve hired writers like Ari Herstand and Nina Ulloa who can deal with it and shove it right back.

Sure, I’ll criticize the anonymous cowards that take pot-shots behind the veil of pseudonyms, especially since I’m putting my name on everything.  But I also have gone to extremes to defend their right to be anonymous, because a lot of people simply won’t talk if they can’t be guaranteed anonymity.  Some companies have rules against commenting.  Others have clients they don’t want to piss off.  Or, they would get fired.  But they are extremely important members of the industry that desperately need to share information with us.

It’s a classic baby-with-the-bathwater scenario.  But let me take things a step further:

Who even cares if the comment is positive or negative, a compliment or an attack?

What’s the difference, as long as it’s contributing to the discussion?  Why are we weighting the back-slap as more valuable than the pot-shot?  Shouldn’t we care about the information contained in each?   Maybe we’re already seeing the damaging impacts of a society that rewards its children for accomplishing nothing, while sugar-coating failure into some distorted version of success.

Personally I prefer something that’s real and unvarnished.  In fact, I feed off of it.

But there’s something way bigger than all of the above.  Because less than 0.1 percent of all readers actually comment.

Let me say that again: less than 0.1% of readers actually submit comments.  So how could I possibly make that a gauge of the broader Digital Music News community?

I’m always floored and relieved to meet readers — over and over again — who have been with Digital Music News for years, and absolutely love the publication.  Or, disagree violently but also agree violently and can’t keep themselves away (but don’t necessarily comment).  I’ve met entrepreneurs and investors who have cited Digital Music News as inspiration or a critical information source in their decision to invest or start a digital music company.  Or, a decision not to do either.

And the strangest thing?  Many times I had no idea these people even existed or felt this way until we met over coffee, or I popped open the surprise email.  Because as important as our comments section is, the real community of Digital Music News is way bigger.  But it’s also a highly-decentralized and fragmented ‘community’ due to massive changes that have occurred over the past ten years, which means the feedback loop is fractured and dysfunctional as well.

Maybe that’s best viewed as a challenge and opportunity instead of a problem.  And as Digital Music News continues to explode in traffic and influence, it’s something we should be thinking about some more.

And if you don’t like that, well, you can tell me to go f*&k myself.  I really don’t mind.

Image by The unnamed, adapted under Attribution-ShareAlike 2.0 Generic (CC BY-SA 2.0).  Written while listening to London Grammar.