Let Me Explain Why U2 Is Damaging the Music Industry… 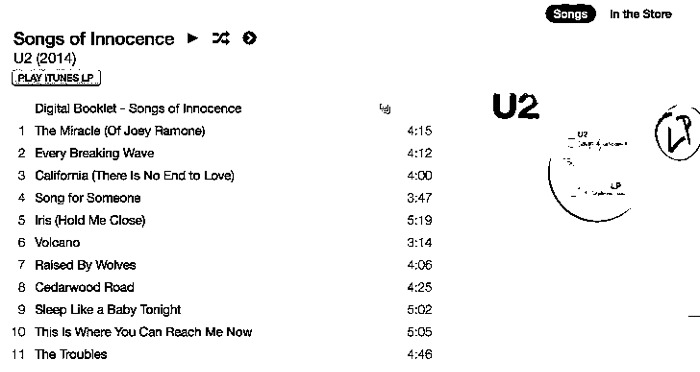 U2’s much-publicised decision to give away 500 million copies of their new album around the world resulted in sales of just 6,047 additional copies of their 19-album back catalogue in the UK last week, according to Entertainment Retailers Association (ERA) analysis of Official Charts Company data.

And less than 60 of them went through High Street stores.

This vindicates our view that giving away hundreds of millions of albums simply devalues music and runs the risk of alienating the 60% of the population who are not customers of iTunes.

If one of the justifications of this stunt is that it would drive sales of U2’s catalogue through the market as a whole, then so far at least it has been a dismal failure.

Aggregate sales of U2’s catalogue amounted to 697 albums across Great Britain and Northern Ireland the week before the band announced it would give away 500m copies of their latest album, Songs Of Innocence. Last week they amounted to 6,744, a massive 868% increase, but worth at retail prices less than £50,000.

Of those sales, a massive 95.4% were digital downloads, since physical retailers were not briefed in advance to order in extra stock.

This promotion is a failure on so many levels.  It devalues music, it alienates the majority of people who don’t use iTunes and it disappoints those who prefer to shop in physical stores since few shops had U2 stock available.

Giving away music like this is as damaging to the value of music as piracy, and those who will suffer most are the artists of tomorrow.  U2 have had their career, but if one of the biggest rock bands in the world are prepared to give away their new album for free, how can we really expect the public to spend £10 on an album by a newcomer?

Independent research conducted for ERA indicates that more than 60% of the UK public does not use iTunes.  For U2’s last album, No Line On The Horizon, 87% of UK sales in the first month were on physical formats, according to Official Charts Company data.

Dumping an album in hundreds of millions of iTunes libraries whether people want it or not, reduces music to the level of a software update or a bug-fix or just plain spam.