78% Of Millennials Would Rather Spend Money On Experiences Than Things

According to a new survey conducted by Harris Poll on behalf of online ticket company, Eventbrite, Millenials would rather spend money on experiences than things.

Millenials are not their parents. They don’t care about flaunting wealth. Fancy cars aren’t as important as reliable ones. Or even having one at all. Millenials live for the moment.

Because of the Great Recession of 2008 and the subsequent Occupy Wall Street movement of 2011, Millenials aren’t gravitating towards professions focused around greed.  Unlike their parents, they understand that nothing is for certain. There’s no such thing as a secure job anymore. Facebook and Twitter have brought a worldwide interconnectedness that was never truly felt or understood by generations past. Millenials care more about humanity than personal wealth.

Consequently, Millenials want to spend their money being with others. 69% of respondents said they believe attending live experiences helps them connect better with their friends, their community and people around the world.

82% of the participants in the survey indicated they had attended a live event in the past year and 72% said they’d like to increase their spending on experiences in the coming year.

Sure, some of this desire stems from FOMO (Fear Of Missing Out). Seeing their friends’ Instagram and Facebook photos from concerts fuels the desire to attend post-worthy events in the future. What used to be “talked about” is now “posted about.”One of the reasons EDM has dominated the festival circuit over the past few years is because of the party. The costumes. The makeup. The experience. The photos. It’s not about the music, but the scene. It matters more if you were there and have the Instagram photos to prove it than if you have the artists in your iTunes library.

EDM will fade, but the festival experience will not. There are more festivals now more than ever. New ones pop up so frequently that it’s nearly impossible to keep track. JamBase lists that there are 138 upcoming music festivals worldwide just in the coming 6 months – in the “off season.” 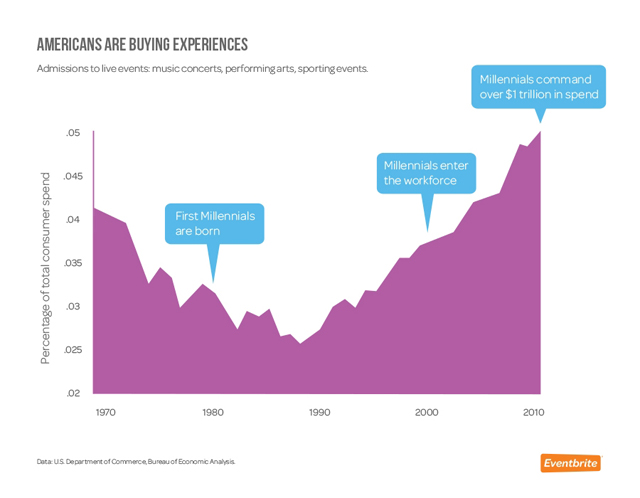 Connectivity and Experience driven startup, BandPage, has focused their business model around helping artists monetize exclusive experiences for their fans. They’re onto something. If Millenials are willing to spend their money on experiences, then why not give artists the ability to control more of those transactions? More money in the artists pocket.

While Millenials don’t believe digital music needs to be paid for, they are happy to pay for concerts and other artist-fan experiences. And they are interested in supporting their favorite artists in ways that make sense to them. Uncovering these alternative monetization opportunities is the key to rebuilding, reinventing and rebranding the music industry.