Spotify Is Now Profitable In the UK… 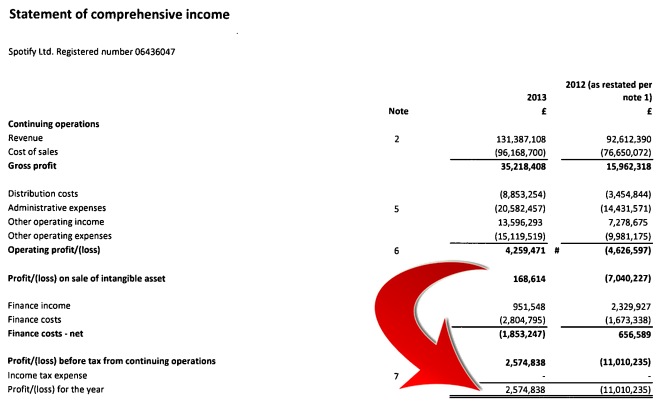 The following is a developing story.  Please check back for ongoing updates, including the release of more financial data.

In total, Spotify is present across 58 countries worldwide, and a top-level, global financial report has not been released.

In the UK, Spotify UK counted a profit of GBP 2.58 million ($4.1 million) for 2013, a reversal from losses of GBP 11 million ($17.68 million) in 2012.  Accounting changes appear responsible for some of the shift, though Spotify’s subscriber and advertising revenues both increased last year.  Bundled deals with Vodafone, coupled with discounted student subscriptions, help to boost subscription-based revenues, despite both netting lower per-subscriber revenues.

The filing comes just days after a presentation by Digital Music News at the Vienna Music Business Research Days symposium on the financial problems that streaming services face, and will undoubtedly pour fuel onto the debate over whether streaming music services can become sustainable businesses.  But the dataset is limited and preliminary: the finances come from a country where Spotify enjoys heavy saturation, and little else is know about the worldwide picture.

Licensing costs, particularly from the major labels, remain extremely large.  According to the filing, licensing costs accounted for more than £96.2 million, or 73.2 percent of revenues.

That is a number that remains large and variable, meaning that the more money Spotify makes, the greater the licensing fees (and equity demands) become.

Administrative expenses added another 16% in costs.  Investors have sunk more than $500 million into Spotify so far.